Gorillas are the largest mammal

This mountain gorilla in Uganda is currently eating a root.

Gorillas are the largest and most powerful great apes. They therefore belong to the mammals and are the closest relatives of humans. In the wild they only live in the middle of Africa, roughly in the same area as the chimpanzees.

When male gorillas stand up, they are about the size of an adult human, namely 175 centimeters. They are also often much heavier than humans. Male animals can weigh up to 200 kilograms. Female gorillas are only about half as heavy.

Gorillas are endangered. Humans are clearing more and more jungle and planting plantations there. In places where there is civil war, it is difficult to protect gorillas. Humans are also increasingly hunting gorillas to eat their meat. Researchers, poachers and tourists are infecting more and more gorillas with diseases such as Ebola. That can cost the gorillas their lives.

How do gorillas live? 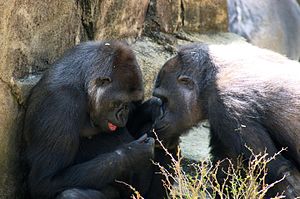 Gorillas are sociable animals. They live in groups. The young animals like to romp around with each other.

Gorillas mainly eat leaves. This is where they get most of their food and fluids: Otherwise they drink little. The lowland gorillas also have fruits. Every now and then gorillas eat insects or other small animals.

Gorillas are good at climbing trees. On the floor they walk on their feet and hands. However, they are not supported on the whole hand, but only on the second and third fingers. With us, that would be the index finger and the middle finger.

Gorillas are awake during the day and sleep at night, much like us humans. They eat in the morning. They rest for about four hours over midday. In the afternoon they eat again and then prepare a place to sleep. It's a nest made of branches and leaves. They build the nest in a tree or on the ground. You only need a few minutes for this. Usually a gorilla only sleeps one night in the same nest.

Gorillas are sociable animals. They live together in groups. Depending on the gorilla species, a group consists of only a few animals. But it can also be up to 40 gorillas. In each group, one male is the boss. It is usually the oldest and already has gray hair. It is therefore called "silverback" or "silverback male". The group also includes other males, they are called "black backs". This includes the females and the young.

Each gorilla group has its own territory. They are very different in size. They range from around 400 to over 3,000 football fields. The groups evade each other, so there are no disputes. Within the group, gorilla males fight each other when it comes to who can be the head of the group. When a new male becomes the master of a group, it kills the little gorillas that have a different father. The head of the group wants only he and his own children to reproduce.

How do gorillas reproduce?

Only the silverback is allowed to breed with the females. The females are ready to do this about once a month. The pregnancy lasts just under nine months. This is how long a mother carries her young animal in her stomach. Usually she only gives birth to one young animal at a time. Twins are very rare.

A baby gorilla weighs around two kilograms. That corresponds to a rather light human baby. It then drinks milk from its mother's breasts. It can crawl at around three months, after which it rides on its mother's back for several years. However, almost half of gorilla babies die in their first year of life. At around three or four years old, the young animal no longer gets any milk. The mother can then become pregnant again.

Before a female can become pregnant, she must be around six to eight years old. Males can only make young when they are around ten years old. In nature, however, it usually takes longer. Around this time the males and females leave their group and find another group. This is important, otherwise the groups would get sick over time. Gorillas live to be around 40 years old, and even older in zoos.

What types of gorillas are there? 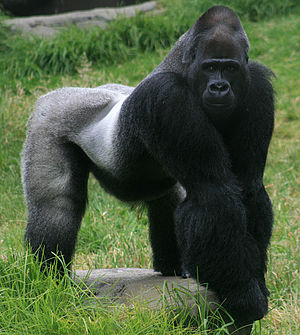 A male gorilla at the San Francisco Zoo in the USA. In older males, the fur on the back turns gray. They are therefore called silverback.

There are several types of gorillas. They are initially divided into western gorillas and eastern gorillas. The western ones are rather smaller and slimmer and have a gray-brown fur. They live roughly where the Gulf of Guinea lies, part of the Atlantic Ocean.

The east live in the east of the Democratic Republic of the Congo and a little further east. That's a lot farther from the coast. These gorillas are slightly larger and have darker fur. They are rarer than their western relatives.

There are lowland gorillas in both the east and west. They like forests and also like to climb. The mountain gorillas only live in the west: they like the hilly landscape. You're more likely to stay on the ground. 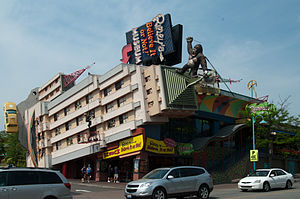 In 1933 the film "King Kong" was released. It's about a giant gorilla that is making New York City unsafe. Gorillas are often portrayed as some kind of monster. This museum in Canada is built like a gorilla blown away for fun.

Gorillas are big and very strong, but they are also shy. If you meet people in the jungle, they can get scared. If humans do not keep their distance, the gorillas try to defend themselves. First they scream and attack for pretense. If humans do not shy away from this, gorillas bite and hit.

A person without weapons has no chance against a gorilla. Most people survive, albeit with broken bones. But all of this happens very rarely. Some people are much more dangerous for gorillas because they hunt gorillas or saw the jungle for them. Today they almost only live in protected areas where they are guarded.