What do you think of Microsoft Xcloud

Microsoft xCloud: The Xbox world for on the go in the test

Microsoft has started the beta phase of its game streaming service xCloud. The product is in direct competition with Google Stadia and Nvidia GeForce Now. With this solution, video games from the Xbox and PC should also be playable on smartphones and tablets. In order to take part in the pre-test, the associated Android app, a compatible gamepad and an Xbox Game Pass Ultimate membership are required. We took a closer look at xCloud and in this test we can tell you how well the service is already working. 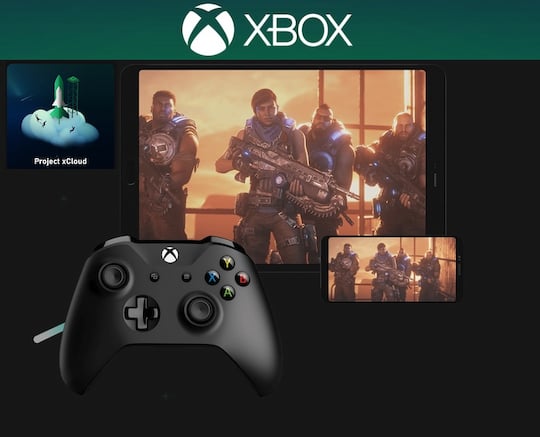 Microsoft xCloud will officially launch soon
Microsoft It was through its DirectX programming interface that Microsoft came up with the idea for its first console - the Xbox. Meanwhile, Xbox no longer only stands for a specific device, but for a whole infrastructure of services, software and hardware. The philosophy behind it is platform-independent gaming. If you want to enjoy Microsoft pearls like Halo 5, Gears 5 and Forza Horizon 4 - or titles from other development studios - you should be able to do so on the Xbox as well as on the PC, smartphone or tablet.

While the in-house consoles and computers can download and install the games natively, mobile devices are often not powerful enough for this. In times when, at least in urban areas, LTE networks are well developed and WLAN hotspots can be found in many corners, cloud gaming is an alternative. We have already tested the Xbox streaming via the user's console. With xCloud, however, the games included in the Game Pass are calculated on Microsoft servers and streamed to the mobile device. This means that users - provided they have an Xbox - no longer have to start it for the transfer. 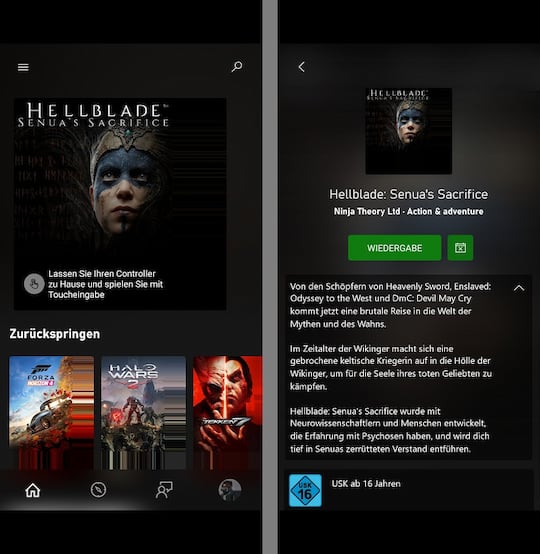 Games library at xCloud
Microsoft First, Xbox Game Streaming (Preview) must be downloaded from Google Play and installed. Android 6.0 is the minimum requirement. Users with an iPhone or iPad are currently left with nothing, as Microsoft does not meet the strict restrictions of the Apple App Store. The second requirement is a Game Pass Ultimate subscription. If you do not have the service and are contemplating membership, you will find further information here.

After starting the Xbox Game Streaming app, you will be logged in with the Microsoft account. The menu icon in the top left corner takes you to the selection of streaming options. While console streaming transmits the entire screen content of the private Xbox to the mobile device, Project xCloud operates independently via the Microsoft infrastructure. As soon as xCloud has been clicked, an overview of the available games opens. As a rule, you will need a Bluetooth gamepad - at least for the current status. 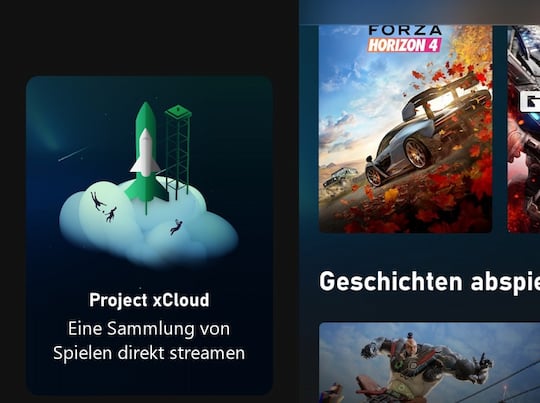 This icon is used to start the game streaming
Microsoft Instructions for pairing the controller guide you through the process. As soon as the control unit is connected and a sufficiently stable internet connection has been found, cloud gaming starts. Microsoft seems to be working on a solution to enable games via xCloud without a gamepad. The action adventure Hellblade is the first game with optional touch controls. The Game Pass currently offers a total of 104 boredom killers via streaming. It is a colorful mixture of the software offerings for the Xbox and the PC.

These include highlights from Microsoft's development studios such as Halo 5, Halo: The Master Chief Collection, Gears 5, Forza Horizon 4, Forza Motorsport 7, Ori, Sea of ​​Thieves and Bleeding Edge. The new open world survival game Grounded is missing, which is probably due to its beta status. A feed of the successes and activities of other players as well as a feedback section for your own suggestions can be found next to general settings in the lower toolbar. But not too much can be regulated here. Activating / deactivating the data connection, online status and voice output are the only options.

What we liked about Microsoft xCloud 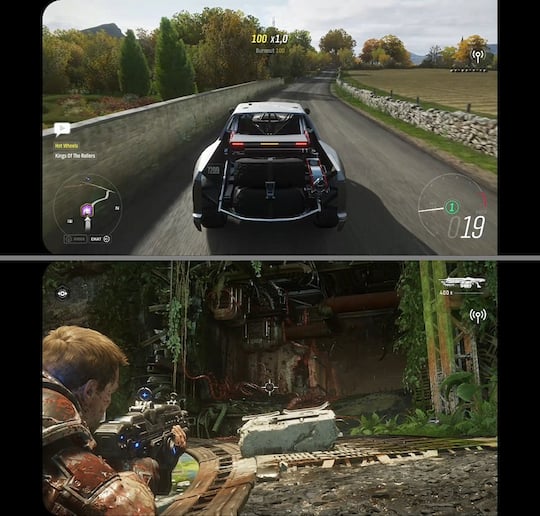 Above Forza Horizon 4, below Gears 5
Andre Reinhardt Although the open beta phase will end on September 15th and the regular service will start afterwards, there is already a wide selection of games. The synchronization with saved games in the cloud works smoothly. The connection is also established quickly, whether via WLAN or the cellular network. The stability of streaming via xCloud is roughly on par with console streaming. If there is a stable and sufficiently fast data connection, the process usually runs at a sufficient frame rate. Microsoft specifies 10 Mbit / s (via 3G or 4G) or a 5 GHz WLAN interface as minimum requirements.

Graphically, what is offered is noticeably higher than what the regular mobile gaming sector has to offer. Although the compression of the stream is more or less noticeable depending on the connection, a console-like display is achieved. The sound quality is also on a very high level. We found the automatic pause function to be particularly practical. If the app is minimized, the respective game is paused immediately. Cloud gaming can thus be continued seamlessly at a later point in time. Of course, this does not apply to online multiplayer titles. 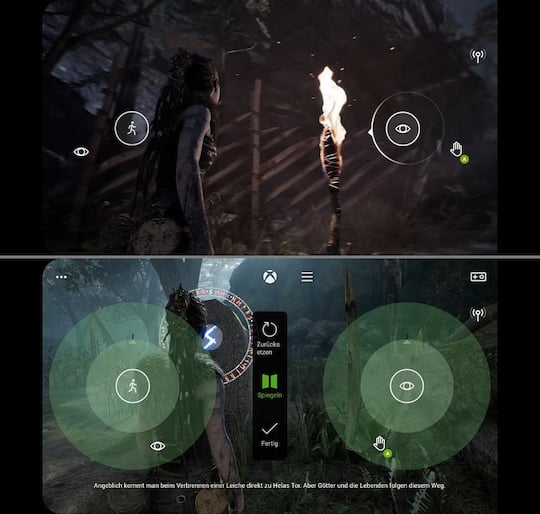 Touch controls on Hellblade
Andre Reinhardt Since Hellblade: Senua's Sacrifice is the first xCloud game with touchscreen controls, we of course also tried it out. The control elements can be freely positioned and react reliably. The method does not come close to the comfort and accuracy of a gamepad, but it does increase mobility.

The games library is unfortunately still quite confusing. There is currently no division into genres. Only the categories “Re-enact stories” and “All games” are available. Even if there is a search function, the design in this form is cumbersome. We also miss screen adjustments - as was the case with console streaming. The market for Android smartphones and tablets is highly fragmented in terms of display format. Black bars will be seen on most mobile devices. Zooming in would remove the black borders, albeit at the expense of a poorer overview in the game.

In general, as mentioned at the beginning, the options are sparse. Above all, a choice of streaming quality would be desirable. 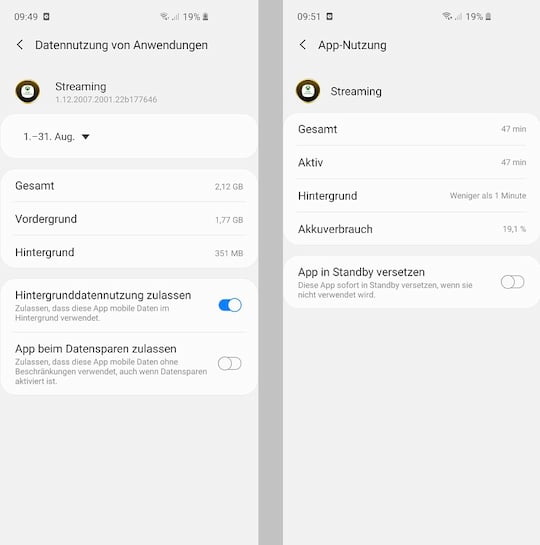 XCloud data and battery consumption
Andre Reinhardt We used the service for the test for 47 minutes. During this time, 2.12 GB of data was transferred. So you can plan around 2.5 GB (depending on the quality) for one hour of cloud streaming. In the case of tariffs with large data volumes or even LTE Unlimited, this is not a problem. Alternatively, streaming takes place via WLAN. If you cannot meet both requirements, you should always keep an eye on your transferred quota.

xCloud approved 19.1 percent of the battery in our test. A Samsung Galaxy S10 with 3400 mAh of comprehensive power storage was used. After around four hours of cloud gaming, the battery on such a cell phone should give up its sails. A Galaxy A21 offers 5000 mAh and should last longer. Especially since the screen resolution here is only 1600 x 720 pixels.

To fully evaluate the service before the launch in mid-September would not be fair. Our impressions relate to the current status, we will also assess improvements of the final version. For a beta version, xCloud already makes a good impression. Sometimes there are drops in the frame rate despite a sufficient internet connection, the games catalog is confusing and the variety of options is meager. We are curious to see if Microsoft can fix these criticisms by the time it is published. In any case, there is a lot of potential in xCloud and Google should be vigilant due to the strong competition.