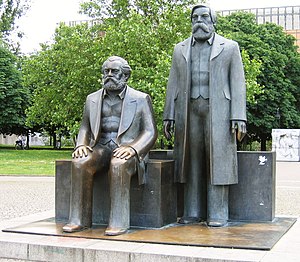 Long before communist governments existed, Karl Marx and Friedrich Engels wrote about communism over 150 years ago. This monument stands in Berlin for the two German thinkers.

Communism is an idea of ​​how people will live in the future. Communists believe that it would be more just if all important things, especially the factories and natural resources, belong to everyone together. Then there would be no more poor and no more rich and no wars. Nobody would have to go hungry or sleep on the street anymore because they could not afford the rent for an apartment.

There have already been several attempts to introduce communism, especially in the Soviet Union and other countries in Eastern Europe or in the German Democratic Republic. There was only one party left. The companies belonged to the state. The state became too strong and oppressed its citizens, especially those who opposed it. This is still the case today in the countries that call themselves “communist”, namely China, North Korea, Vietnam, Laos and Cuba.

Socialism is a word similar to communism. Here, too, it is about something in common. For communists, socialism is one step ahead of communism. Communist countries therefore usually only call themselves “socialist”, communism is still something for the future. But there are also politicians who see themselves as socialists and don't believe in communism. They also speak of democratic socialism and emphasize that they want to come to government not through violence, but through elections.

Vladimir Ulyanov from Russia, who called himself Lenin. He said that as a communist one should not wait for communism, but bring it about by force. He became the ruler of Russia and had many people killed.

So communism is a political idea that is debated a lot. His opponents say that communism is not good for people because everyone should be able to develop freely and live well through diligence.

But even the supporters of communism do not agree on what the right communism should look like. Above all, they also argue about how to get there and whether one should move people to communism peacefully or by force. Many who like communism in itself do not like this violence. Nor do they like that in countries where communism is practiced, only one party is allowed, namely the communist party.