Warning of a return to nuclear energy

On the tenth anniversary of the nuclear disaster in Fukushima, the Regensburg “Alliance for Nuclear Phase-Out and Renewable Energies” is calling for compliance with the nuclear phase-out in the coming year. 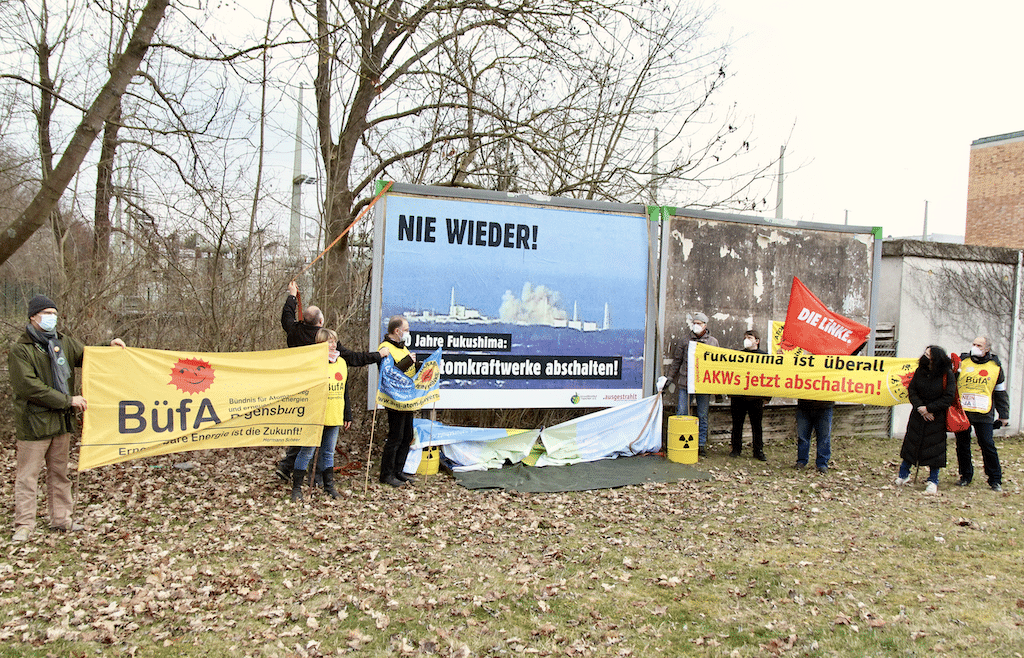 The alliance for nuclear phase-out fears that the use of atomic energy will experience a renaissance. Photo: bm

Ten years have passed since the reactor disaster in Fukushima, Japan, as a result of an undersea earthquake. Even today there is a restricted area of ​​300 square kilometers - an area the size of Munich - around the nuclear power plant. But it is not only in Japan that politicians continue to adhere to nuclear energy as an important pillar of energy supply. In Germany, too, the supporters' voices are gradually getting louder again.

The Regensburg “Alliance for Nuclear Phase-Out and Renewable Energies” (büfa) therefore fears that the final phase-out from nuclear energy, decided by the black and yellow federal government on March 14, 2011, will be put up for discussion again. At the end of 2022, Emsland, Neckarwestheim 2 and Isar 2 would be the last German reactors to go offline and after 60 years the era of commercial nuclear fission in Germany would end.

Nuclear energy is a big topic in Europe

But in fact, the topic does not seem to have been completely over in Germany either. The Federal Ministry for the Environment, Nature Conservation and Nuclear Safety is taking the tenth anniversary of Fukushima as an opportunity to discuss current issues relating to the use of nuclear energy in a public, virtual event on March 11th. “Does nuclear power have a future in Europe?” Was one of the discussion groups. 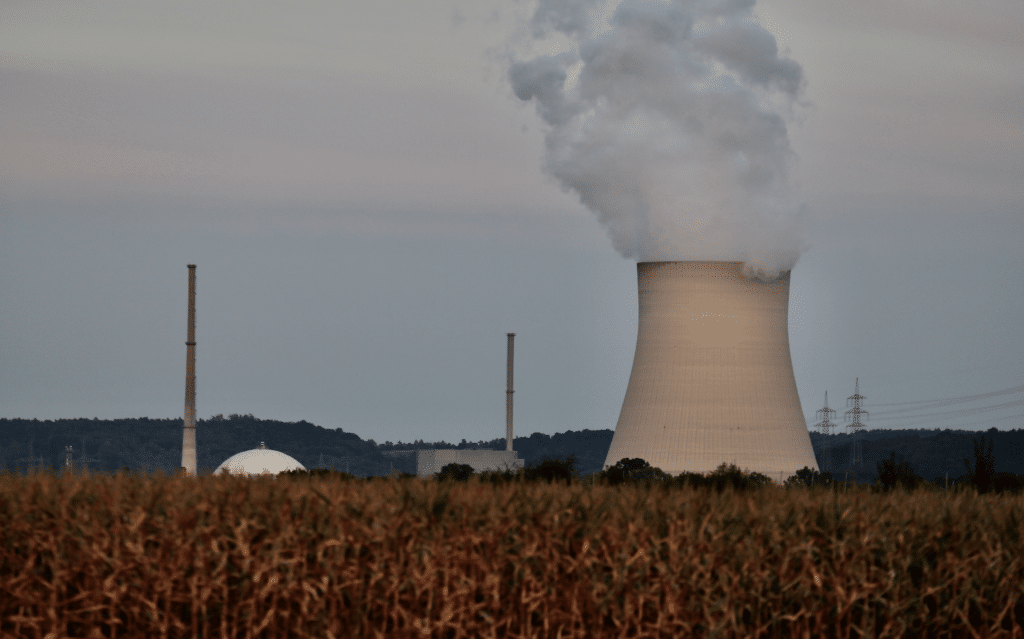 Steam is still rising above the Isar II nuclear power plant. The end of 2022 should be over. Photo: bm

The ITER project in Cadarache, France, shows how vivid the dream is to use the enormous potential of radioactivity almost 35 years after Chernobyl. The International Thermonuclear Experimental Reactor is to be put into operation there soon. This is an experimental reactor for research into energy generation through nuclear fusion. A technology that has been praised as future technology for several decades and was recently advertised as the energy of the future by Microsoft founder Bill Gates.

"Far from being dry"

The idea for the 20 billion euro ITER project goes back to an agreement reached in 1985 between François Mitterrand, Ronald Reagan and Mikhail Gorbachev. In addition to the USA and Russia, the European Union, Great Britain, China, India, Japan, South Korea and Switzerland belong to the consortium. The importance of the project for the EU is shown by the fact that almost half of the European energy research budget is spent on it.

In Regensburg, however, they are not really convinced of the idea on Wednesday. The büfa unveils a large advertising poster across from the Bayernwerk headquarters. "Never again! Switch off all nuclear power plants! ”Reads on it. "Fukushima is still not over and a reactor catastrophe is no sheet metal damage," says Petra Fielbeck (büfa). And yet “the nuclear phase-out is far from being dry”. 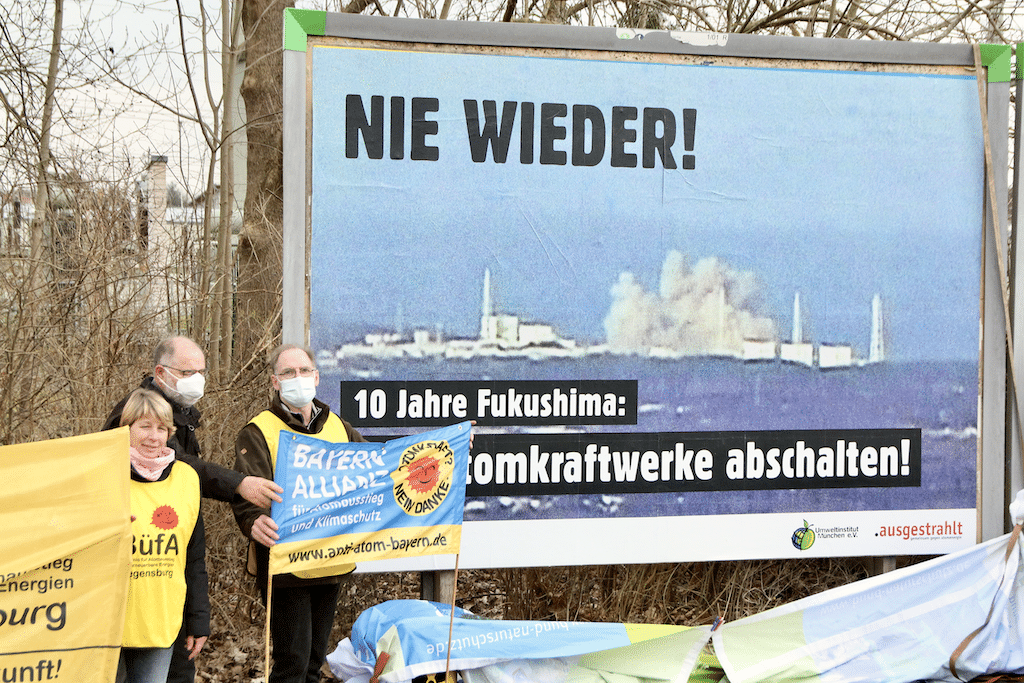 The posters can be seen in several places in the city in the coming days.

Robert Fischer, a direct candidate for the Bundestag for the ÖDP-Regensburg, describes the idea of ​​nuclear fusion as “pure wishful thinking”. “We are far from commercial use here.” The energy transition and the move away from coal-fired power generation must be tackled now “and not in 15 years”.

Poland wants to get into nuclear power in 2033

The fact that the energy company Bayernwerk is being reminded of the disaster in Japan is related to its parent company E.ON. “E.ON is involved in the financing of nuclear energy in a variety of ways.” While Isar 2 near Landshut is due to go offline soon, the Urenco Group, in which E.ON is involved, will continue to enrich uranium in Gronau. The company is also involved in new construction plans in the UK and Canada.

These are by no means the only countries that continue to rely on nuclear energy. For example, France, Belgium and the Netherlands extended the life of some of their reactors. With Beznau 1 and 2, there are the oldest nuclear power plants in Europe in Switzerland. They went online in 1969 and 1971 and will continue to operate as well. New nuclear power plants are to be built in Hungary and the Czech Republic and Poland is planning to enter nuclear power by 2033.

All of these countries are still heavily dependent on nuclear power today, which, according to Fischer, is making the energy transition significantly more difficult. In 2019, the 56 French nuclear power plants generated around 70 percent of the nation's electricity demand. The country with the most nuclear reactors in Europe recently paved the way for an extension of the service life of the oldest 32 power plants. Some of them were put into operation at the beginning of the 1980s and have long since reached their 40-year lifespan.

Due to long-standing safety concerns, the Greens want to prevent the export of nuclear fuels from German production to foreign plants. And in the past, Federal Environment Minister Svenja Schulze (SPD) repeatedly called for exports to old nuclear power plants close to the border to be stopped. But European law does not make this all that easy. And the states mentioned explain their adherence to nuclear energy also with the fight against climate change. After all, the technology is climate-neutral and relatively cheap.

Climate change is not an argument for the nuclear reactors

Arguments that are not accepted by the Regensburg nuclear power opponents. "That is a pseudo-argument," says not only Fischer. Nuclear power is "fundamentally uneconomical" due to high investment costs, safety aspects and uranium mining. "With the expansion of renewable energies, however, the price of electricity has steadily fallen." But that is exactly what would be further impeded. The district council of the Left Party Klaus Nebl also refers to the continued high risk of nuclear waste. "But that will be passed on to the taxpayer anyway, while the federal government has also paid the operators billions as a so-called compensation for the exit from nuclear energy."

“It is now ten years after Fukushima and almost 35 years after the Chernobyl disaster. One has to ask oneself: Have we really learned something if the subject is now being put up for discussion again by lobby associations, ”asks the Bundestag member of the Left Party Eva-Maria-Schreiber. It too calls for the rapid and extensive expansion of renewable energies. That is the key to the energy transition, instead of preventing the nuclear phase-out again.

The büfa poster campaign is the prelude to a week of action. An online event on the topic will take place on Thursday evening. On Friday, the citizens' association, together with Parents for Future, will organize a climate vigil in front of the old town hall.

Is this text worth anything to you?