How fast do trains travel in Switzerland?

The Swiss can rightly be proud of their rail system. It is a showpiece in terms of punctuality, reliability and train frequency. A sophisticated cycle schedule and coordinated connections ensure that the train is probably the most popular form of public transport for the population. Because of its central location in Europe, it is not surprising that many high-speed trains run from neighboring countries to Switzerland. As early as the 1980s, the French TGV network was expanded via south-east France to Zurich. Meanwhile, some ICE trains also end in Switzerland. Italian Pendolini series 470, 600 and 610 complement the transfer-free connections to Italy and Germany. A local construction is the ICN, which, despite its top speed of only 200 km / h, is known as the "high-speed train". The near future promises a significant reduction in travel times on the north / south axis. Three new tunnels and the expansion of the existing network should bring more people and goods back onto the rails. 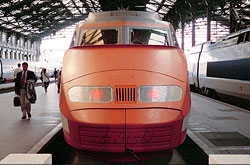 The orange TGV Sud Est were the first series trains for passenger traffic and are supplied with electricity from the overhead line. On February 26, 1981, a test set reached 380.4 km / h - that was a world record. In the same year, SNCF used the first commercial trains on the “Paris - Lyon” route. The top speed was initially 260 kilometers per hour, but was later increased to 270 km / h and 300 km / h. In the course of time, the entire central space was the domain of the orange high-speed trains. Some units even went to Switzerland. In 2013, however, the state railway began to take the first copies out of service. 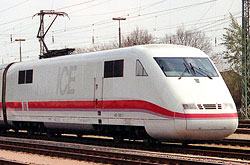 The first 23 ICE trains went into operation in June 1991. Bit by bit, Deutsche Bahn increased its ICE 1 fleet to 60 vehicles. In a serious train accident on June 3, 1998, a train of this series crashed after a derailment on a bridge. Since then, only 59 ICE 1 trains have been running through Germany and parts of Austria and Switzerland. From mid-2005 to the end of 2008, DB made the trains fit for the next ten years with an extensive modernization program. 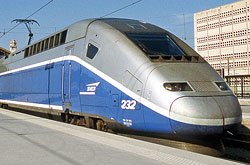 With the TGV Duplex, the SNCF dared to make the leap to a two-story TGV, whose cars have two levels in which the passengers are accommodated. What is striking is its significantly more aerodynamic head shape. This series was initially intended for the routes south of Paris, but now the TGV Duplex are on all main routes within France with a high volume of traffic. Four low-cost TGV duplexes have been operating as "Ouigo" since April 2013. 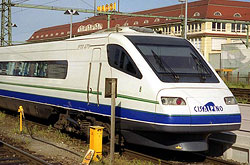 Due to the name of the operating company, the nine trains were known as "Cisalpino". The area of ​​operation extended from northern Italy through Switzerland to Germany. Unfortunately, the 200 km / h tilting trains caused so many problems that they were banned from the German rail network. At the end of 2009, Cisalpino ceased operations. 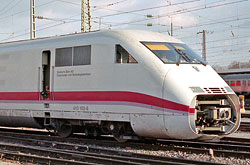 In the mid-1990s, Deutsche Bahn had a new experimental train put together to replace the now outdated ICE-V. The ICE-S originally consisted of ICE 2 power cars and three intermediate cars, with new, partly powered bogies being tested, which were later found in series in the ICE 3. The ICE S is still used today to check tracks and overhead lines. 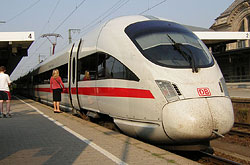 This 230 km / h ICE train has tilting technology and accelerates traffic on winding routes. As with the ICE 3, half of all wheels are driven and there are no more power cars. The second ICE-T generation rolled out for the 2004/2005 winter timetable. A year later, the tilting trains were used in Austria. 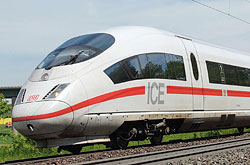 The new Frankfurt am Main - Cologne line went into operation for the 2002 summer timetable. Due to the steep gradients and a targeted maximum speed of 300 km / h, trains had to be ordered with low axle loads and high acceleration capabilities. On the ICE 3, which made its debut in the summer of 2000 at the EXPO in Hanover, half of all wheels are driven and there are no more power cars. Multi-system trains are also available for use abroad. 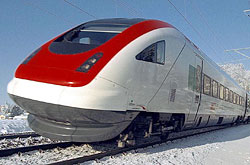 The first high-speed train in Switzerland to be built by Swiss industry is the ICN. Thanks to its electrical tilting technology, it accelerates traffic primarily on the east-west axis. 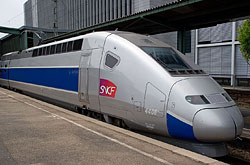 The latest generation of TGV trains has been connecting France with Germany since June 10, 2007. Most of the units serve the route from Paris via Strasbourg to Stuttgart. Once a day, a TGV continues to Munich. Some TGV-POS trains are now also on the north branch from Paris to Frankfurt am Main. 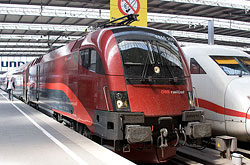 Siemens Mobility designed 51 locomotive hauled push-pull trains called "railjet" for the Austrian Federal Railways. A composition consists of a Taurus high-performance locomotive, non-powered intermediate car and a control car. With up to 230 kilometers per hour, the international trains can not only be found in Austria, but also run to Switzerland, Germany and Hungary. The special feature of the railjet super trains is their high level of comfort.

In February 2004, both TrenItalia and the former Cisalpino AG ordered fourth-generation Pendolino tilting trains. In addition to increasing comfort and safety, these series also meet the TSI standard. 12 trains are intended for traffic within Italy, 14 trains for international use in Italy and Switzerland. In the summer of 2012, a further 8 Pendolini were reordered for operation in Switzerland. 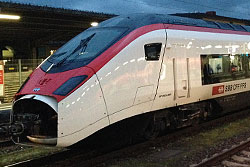 A total of 29 low-floor high-speed trains are manufactured by Stadler Rail in Bussnang, Switzerland. From 2019 the first 250 km / h multiple units will travel from Germany via Switzerland and through the Gotthard Base Tunnel to Italy. Austria should also benefit from the EC250 "Giruno".