Why is UHC important 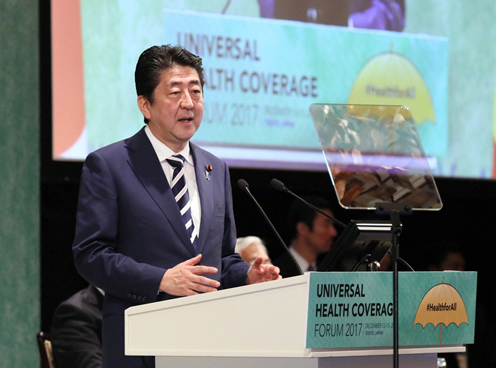 I greet the Presidents of Senegal and Myanmar, Your Excellencies Sall and Kyaw,
The Secretary General of the United Nations, Mr. Guterres, and everyone present, thank you very much for your participation in this forum on Universal Health Coverage (UHC).

Exactly two years ago, Japan held an international conference at this location and announced that it would vigorously promote universal health care (UHC). It is a great pleasure for me that, in cooperation with the President of the World Bank, Mr Kim, the Secretary General of WHO, Mr Tedros, and the Executive Director of UNICEF, Mr Lake, we are now able to present this event in a new guise as the UHC Forum 2017 and in be able to carry out a much larger framework than two years ago.

Japan has for many years attached great importance to the international health care system, taking into account the human security concept. In particular, the promotion of the UHC is a pillar of the Sustainable Development Goals (SDGs), and this comprehensive health care is essential for the realization of a society that leaves no one behind. Based on these considerations, at the G7 summit in Ise-Shima 2016, Japan, as chairman, presented its vision for the promotion of the UHC, which also includes preparation for possible future crises, for the first time at the level of the heads of state and government.

Even after that, my country, together with the international community, for example at the presentation of the “UHC in Africa” concept within the framework of TICAD VI and at the General Assembly of the United Nations, called for increased commitment to the realization of the UHC and itself for this Goal committed. In addition, last year Japan laid the groundwork for a health concept for Asia. We would like to share our experiences with the UHC within an aging society, based on health insurance for all citizens and long-term care insurance, with the other countries of Asia.

On the other hand, there are still numerous tasks ahead of us before we reach the UHC. I would like to make five points about the commitment needed to promote UHC more quickly.

First, to further strengthen the momentum in promoting UHC on a global scale. This month the United Nations decided to convene a high-level meeting on UHC in 2019 and designate December 12th as International Universal Health Coverage Day. This is a first big step towards increasing the momentum. Japan will also host a nutrition summit in Tokyo in 2020 to strengthen engagement in this area as a foundation for human health. In order to be able to achieve the goals related to the UHC, as stated in the SDGs, by 2030, new intermediate goals will be announced as a result of this forum. By 2023, the number of people with access to basic health care is expected to increase by a billion people worldwide; at the same time, it aims to reduce the number of people at risk of poverty because of the cost of their health by fifty million a year. In order to achieve these goals, I will continue to work with Secretary General Guterres and other leading personalities of the international community with all my might for global commitment to the promotion of the UHC.

Second, the design and implementation of a cooperative framework at the state level. Realizing the UHC requires not only the expansion of health systems but also a comprehensive approach in overarching areas such as nutrition, water and hygiene. To this end, we propose the establishment and strengthening of platforms to promote UHC in the individual states. With the close cooperation of the respective governments, the relevant actors such as development partners and the civil sector should work together organically in order to be able to draw up plans for the implementation of the UHC and to enable the training of the necessary personnel. In order to fill these proposals with concrete content, Japan, together with the World Bank, WHO and UNICEF, launched the joint UHC Tokyo initiative and has already started initial activities in some pilot countries. We will then share the findings from these projects with numerous other countries and organizations.

Third, the ongoing review of progress. The most recent report by the WHO and the World Bank uses the guidelines established by the United Nations and officially measures the progress made in making the UHC a reality. This represents a major breakthrough in this area. To further this ongoing and evolving review, Japan will continue to support this UHC forum.

Fourth, securing sustainable funding for the UHC is an urgent task. It is extremely important that not only the ministries of health, but the governments as a whole, including the ministries of finance, ensure stable funding at the national level and that they work together efficiently in international aid.

Finally, I would also like to point out the great importance of innovations. A completely new approach has been started in Africa, in which drones with technology Made in Japan are used in order to be able to offer corresponding services in this area in regions that were previously without health care. As part of the TICAD process, we will share the diverse knowledge we gain from this and other projects and continue to expand the health sector.

In order to flexibly advance this comprehensive commitment, Japan pledges to provide a total of 2.9 billion dollars to support nationwide health care in the coming years. In this way we will vigorously advance the commitment of the individual states and organizations.

Health leaders from around the world have come together for this gathering. It is my sincere wish that you will have a fruitful discussion here, which will provide much inspiration and will point the future course in advancing the UHC.

Thank you for your attention.