What became of the early Jewish Christians

Christian and Jewish pamphlets in antiquity and the Middle Ages 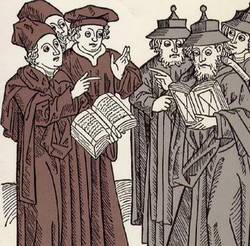 Both Christianity and Judaism have a long tradition of pamphlets dealing with the other religion. This writing culture began shortly after the emergence of Christianity and has continued to this day, although many central questions have remained the same. In addition to the question of the Messiah and the entry into the kingdom of heaven, this also includes the topic of the relationship between the two religions. Often people are asked how one should behave towards members of the other religion, although the answers to these questions have changed drastically over the centuries.

Christianity finally developed into its own religion in the late 1st century and early 2nd century, sharply demarcated from Judaism, and rabbinical Judaism was formed in parallel. The separation took place mainly through the initially unorganized pagan mission. While the earliest Christians were converted Jews, the number of Gentiles professing Christianity soon took the upper hand and insisted on a sharp separation from "old" Judaism.
The Old Testament forms a literary connection between these religions, which both count among the fundamental religious scriptures. However, the Old Testament is read and interpreted in different languages ​​by the two religions. Judaism placed great emphasis on literal observance and reproduction of the Old Testament, while Christianity was free to interpret it. The formation of canons also developed differently, in Judaism the Holy Scriptures, the Torah, are based on the Old Testament, while Christianity was based primarily on the Gospels of the New Testament.
The interpretation of the role of Jesus brought early potential for conflict. Although he is clearly recognizable as a Jew in the Bible, both sides often lifted him out of Judaism, as the Son of God, the founder of Christianity, as a rebel or a magician. In Jewish literature in particular, Jesus has been assigned a variety of roles, from prophet to villain. It is only in modern literature that both sides increasingly reflect on the origin of Jesus as a Jew.
The Jews also accused the Christians of practicing idolatry by worshiping saints. The situation was exacerbated by the claim to exclusivity that both religions represented. One saw oneself as chosen by God, while all followers of other religions only followed erroneous beliefs.

The role of Jesus

Christian Adversos-Judaeos writings can already be found in antiquity. These texts were mostly written by Christians for Christians and were primarily intended to justify their own position by listing and commenting on discrepancies between Judaism and the new Christianity. Frequent topics were Jesus Christ as Messiah and the blindness of the Jews who did not accept his role, as well as the new laws he introduced which replaced those of the Old Testament. In these writings there are also early allegations that would reappear later in the Middle Ages, such as hatred of people, ritual murders, the murder of God and atheism. Quotations from the Old and New Testaments were used and interpreted as arguments, but these writings quickly degenerated into polemics.
Through these writings the image of the obdurate, blind Jew developed who refused to innovate and thus fell away from the "right faith". It was precisely the symbol of blindness that was taken up again and again in the course of the Middle Ages and modern times, with the pictorial representation of the Jewish Church, the synagogue, being shown as a blind woman.
In contrast to the numerous Christian pamphlets, ancient Judaism had little interest in Christianity, which at that time was only assessed as a further separation from Judaism. Therefore hardly any pamphlets against Christianity have survived, but the few known ones show that Christianity was seen as a heresy, with Jesus mostly playing a negative role as a magician and seducer. There were also some anti-Christian Jesus legends in which Jesus was described as an illegitimate child, a deceiver and a false prophet. The resurrection was questioned, instead it was argued that the disciples stole the body.

However, these pamphlets were generally aimed at one's own believers. Direct encounters and conversations between Jewish and Christian scholars were rare, as were writings that addressed the other or even both religions. Two famous exceptions were the text "" Dialogus inter Philosophum, Judaeum et Christianum "" by Petrus Abelardus from the year 1141/42 and a similar text, the "" Book of the Gentiles and the Three Wise Men "" by Raimund Lull from 1270 / 75. Both represented the three great monotheistic religions Judaism, Christianity and Islam. One representative of each religion defended his belief. Above all, it is unusual that in the end it does not come about in both scriptures that one religion is identified as the only true one. Abelard even formulates that all religions served one god, but that he was represented in a different form.
In the Middle Ages there were also numerous Jewish polemics against Christianity, whereby these were directed at their own co-religionists. The accusations often included allegations of immorality, heresy, but also the unsuccessfulness of the crusades and missionary attempts in the Middle East. However, there were also scriptures that promoted a positive relationship with Christianity, such as the book of the pious "Sefer Hasidim", which advises praying for Christians who were friendly and helpful to the Jews. The overall tone of the apologetic writings took on an increasingly destructive tone on both sides in the course of the Middle Ages, which then also denied the possibility of benevolent relationships between the two religions.