Why are Vietnamese the largest in Asia

The Vietnamese government presented the economic zone under construction in Vung Anh with pride and confidence during a visit by Deutsche Welle in 2014. A coal-fired power plant, a deep-sea port, a steelworks and other industrial settlements were intended to give the economically underdeveloped central Vietnamese coastal province of Ha Tinh a boost and Create much-needed jobs. The government hoped that more than 40,000 jobs would be created.

But only two years later, this economic zone caused one of the worst environmental disasters in Vietnam's history. The "Formosa Ha Tinh Steel" steel mill discharged sewage into the South China Sea during the test operation. These were contaminated with phenol and cyanide, among other things. Tons of dead fish have washed up on the coasts of four provinces, corals have died and aquacultures have been destroyed. According to the government, the disaster wiped out the livelihoods of more than 40,000 fishermen for several years. The government admitted that 200,000 people were affected. The Vietnamese environmental organization "Green Trees" from Hanoi, which documented the disaster, even assumes that almost a million people have had their livelihoods destroyed. 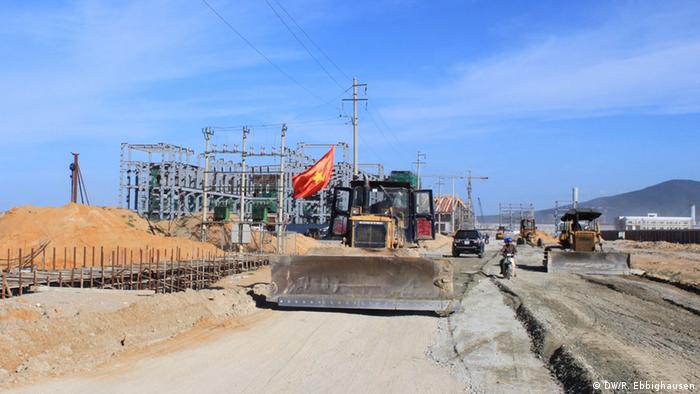 Resistance of the population

The environmental disaster led to protests in the region, in the metropolises of Hanoi and Saigon and some other cities. Security forces suppressed the protests by force, and many activists were arrested and sentenced to long prison terms.

Green Trees has collected film documents of the events and supplemented them with their own film recordings. The result is the rough version of a documentary that was shown for the first time in Germany at the beginning of January in the "taz canteen", the venue of the Berlin daily taz. The film celebrated its world premiere in March 2019 in front of a selected audience in Hanoi.

The film, entitled "So ???" (in German: "Fear ???") shows pictures of the environmental disaster, recordings of demonstrations and arrests, pictures of the economic zone, and questions the inhabitants of the worst affected regions two years after the disaster. Activists and Catholic priests who played an important role in the protests classify the events and provide background information. The Catholic Church in the comparatively poor province of Ha Tinh is traditionally well organized and an advocate for the population. 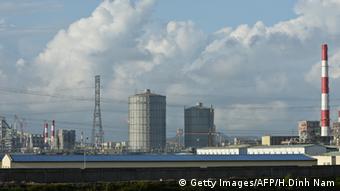 The activists in the film say that the Vietnamese government should have given the population more rights and, above all, a say. Buzzwords like democracy and civil society are mentioned. However, it is not entirely clear whether this is actually a broad political movement that questions the country's political system. Rather, the images convey the impression that a protest movement has formed here that - with good reason - is against the government's handling of the disaster.

The authorities' crisis management was undoubtedly inadequate. Vietnam's government, which relies on foreign investment like that of the Taiwanese steel mill, followed a well-known script: denial, partial admission, finger pointing and horse trading.

At first, the authorities denied any connection between the fish deaths and the industrial zone and launched an algae plague. After almost three months, the government then admitted that "Formosa Ha Tinh Steel" was responsible. However, the blame is the company that did not adhere to the requirements and local cadres who did not react in time. Under no circumstances can the central government be blamed. In the end, a closed-door deal was negotiated with Formosa in which the company agreed to pay $ 500 million in reparation. The process was accompanied by the state press, which complied with the government's volts and labeled the demonstrators as rebels or even terrorists controlled from abroad.

In the end, the US $ 500 million went to state agencies to make the compensation payments, which opened the door to corruption and nepotism that was widespread in the country. Many of those affected, who had lost their livelihood for years, received a sack of rice and 50,000 Vietnamese dong (around two euros) as compensation. 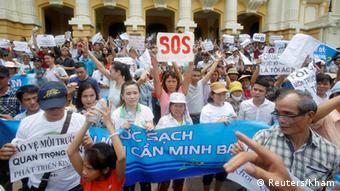 Demonstration because of the fish deaths in Hanoi

The film only partially explains this background, but it clearly shows what deep marks the catastrophe has left in the lives of many people. The residents of the region are frustrated and bitter. The film also makes it clear that the demonstrators, with their demands for direct participation and higher compensation, were ultimately unable to prevail.

Civil society on the rise?

The second statement of the film, namely that civil society in Vietnam emerged stronger from the disaster, is not convincing. Rather, the impression arises that the activists, who are under considerable pressure, are encouraging themselves. This is also indicated by the title of the film. In a first version it was called: "Do not be afraid!". In the end, however, the filmmakers chose the title: "Fear ???". According to the sociologist Anh Susann Pham Thi from the University of Manchester, who conducts research on civil society in Vietnam and the affected region, the new title should give more space to the feeling of fear.

Pham observed that the crisis created local and even supra-regional networks that still exist today. "These networks have two functions: The activists support the actions and protests of others and help each other in everyday life." The support of other activists takes place mainly on social media. Expressions of solidarity are shared in no time during protests or actions across the country. But it often does not go beyond the virtual support, which sometimes takes place in closed Facebook groups. 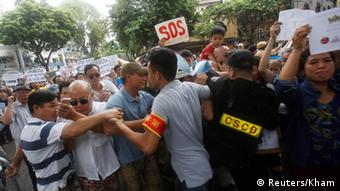 At the same time, the various networks form a kind of surrogate family. Activists in Vietnam not only have to struggle with state power, but are also often socially marginalized. Parts of the family turn away out of fear, neighbors and acquaintances avoid important social events such as weddings or funerals. This form of isolation also affects the filmmaker. The director Dang Vu Luong, with whom Deutsche Welle spoke, has been moving around for years in the hope of avoiding constant surveillance and pressure from the authorities.

Not a broad social movement

The political scientist Jörg Wischermann from the Institute for Asian Studies at the GIGA in Hamburg, who has researched Vietnam's civil society for years, sees little evidence of a strengthened social movement. In an interview with Deutsche Welle, he stated: "Organized civil society in Vietnam lacks young people. And the various protests, emerging social movements and civil society organizations are often not networked with one another." In other words, there are many small and medium-sized groups like in Ha Tinh, but there is a lack of strong connections between them.

The film also shows that there is a lack of young people, in which the parents' generation between 30 and 50 demonstrates. Young people in Vietnam are busy building a livelihood and they know that one fake Facebook post can put them in jail for years. The lack of networking, in turn, makes it less likely that a broad social movement will emerge that could seriously challenge the one-party state.

However, Wischermann also points out that nobody knows in advance when and in which direction a political system can tip.