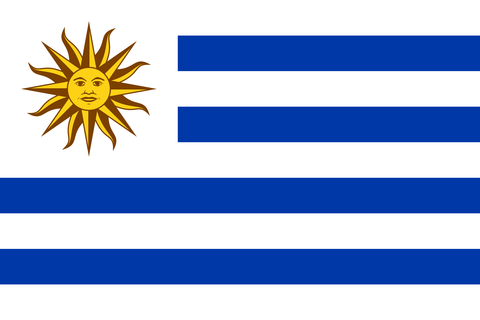 Montevideo is the capital of Uruguay and is considered one of the safest cities in South America. About half of the country's population lives here, and the president also has his official residence here. He is directly elected and is head of state and head of government at the same time.
At the beginning of the 19th century, Uruguay achieved prosperity through its cattle breeding. The health and education system was expanded with the money. In the second half of the last century, however, the economy fared worse. The gap between rich and poor widened and the once well-functioning welfare state faced new challenges. In recent years, however, the country has recovered: poverty and unemployment decreased and the economy grew.

Thousands of years ago people lived in what is now Uruguay. The Spaniards reached Uruguay around 1516 and founded a colony there in 1624. In the period that followed, there were repeated battles with the Portuguese, later also with Argentina and Brazil, who all wanted the country to themselves. During the colonial era, African slaves had to work in South American countries such as Uruguay. Part of the population is therefore of African and European origin. After 150 years under the rule of the Spaniards, Portuguese and Brazilians, Uruguay gained independence in 1830. In the years that followed, calm returned to the country only sporadically: The democratic conditions were repeatedly interrupted by dictatorships and military governments.

Livestock, rice and the beach

The economic center of Uruguay is the capital Montevideo. Around half of the industrial and commercial enterprises are gathered in the port city. Most of the rest of the land is used for agriculture. Large herds of cattle, sheep and horses graze on the grasslands, the pampas. Fishing and the sale of rice and soy are also important sources of income. The country is also popular with holidaymakers, many of whom come from neighboring Argentina. The beautiful sandy beaches at the mouth of the Rio de la Plata are a popular travel destination. The seaside resort of Punta del Este is the main attraction for rich people. Events such as fashion shows, sailing regattas and sporting events provide entertainment there in the summer months.

The majority of the population is of Catholic faith. Children from 6 to 12 years of age go to primary school and then receive further education up to the age of 15. If you have a good exam, you can then take a degree comparable to the Abitur in order to study at a university. Both school and university are free of charge. Christmas is called "Family Day" in Uruguay. Easter and Carnival are also celebrated in a big way. The rodeo week “Semana Criolla” is a special festival. Here riders show what they can do. Football is the most popular sport in Uruguay. In 1930 and 1950 the country was soccer world champion.