We have completely deciphered hieroglyphs 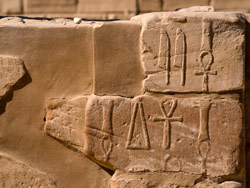 The deciphering of the Egyptian hieroglyphs, these mysterious characters that people carved in stone thousands of years ago and wrote on papyri, mankind owes to the French scholar Jean Francois Champollion.

Even before his birth on December 23, 1790 in Figeac, southern France, a healing magician named Jacquou prophesied to his parents that the new citizen would be "a light of the centuries to come".

From an early age, little Jean Francois showed a great affinity for books and language. His father owned a bookstore in Figeac, so the son was to become a bookseller too. But the boy had other things in mind. The love for foreign languages ​​and scripts seemed to be innate to him, and he was eager to deepen his knowledge. When Jean Francois Champollion, at the age of eleven, saw a picture of the stone of Rosetta, which Napoleon had brought back to Egypt from his campaign, his decision was made: “I want to and will decipher the hieroglyphs”.

And so it happened. On September 14, 1822, Champollion was completely overwhelmed and could exclaim: “Je tiens l'affaire!”. He had made it, had deciphered the enigmatic signs of the ancient Egyptians! Experts and laypeople are still interested in Egyptology today from this grandiose deed. Because now we know that the Egyptians not only had an alphabet comparable to ours, but that their hieroglyphs were also used as symbols - a single hieroglyph can stand for a whole word.

In 1927 Sir Alan Gardiner brought out his comprehensive "Egyptian Grammar" in Oxford, England, which continues to initiate students of Egyptology into the secrets of hieroglyphic writing up to our time.

We now know that the hieroglyphs are a fully developed writing system with which complex information could be written down and carved. The oldest known hieroglyphic texts go back to the time before the third millennium BC. In the Old Kingdom there were only about 700 characters, but by the Ptolemaic period the number of hieroglyphics had grown to over 6000 characters.

The characters were arranged in both rows and columns. Since the Egyptians attached great importance to aesthetic aspects when writing, they arranged the hieroglyphs predominantly in a rectangular shape. The beginning of the line can be right or left, and the hieroglyphs that represent people or animals always look towards the beginning of the text, which makes it a little easier to read. King names were inscribed in so-called "cartouches" and can therefore be classified at first glance.