Selfishness Can someone really act selflessly

Altruism: Is Selflessness Worth It?

We seem to live in a world where everyone only thinks of themselves. In the competition with colleagues we want to prevail at any price, some are even ready to lie or to gain an advantage in an unfair way - the main thing is that in the end you benefit yourself. For altruism There seems to be no place here, true to the motto: If I don't think of myself, nobody does it at all. So behind every good deed is the question: Are you harming yourself with altruism because someone else is shamelessly exploiting your selflessness for their own benefit? However, if you look at and understand the concept of altruism a little more precisely, it quickly becomes apparent that the answer to this question is not as important as it initially seems ... 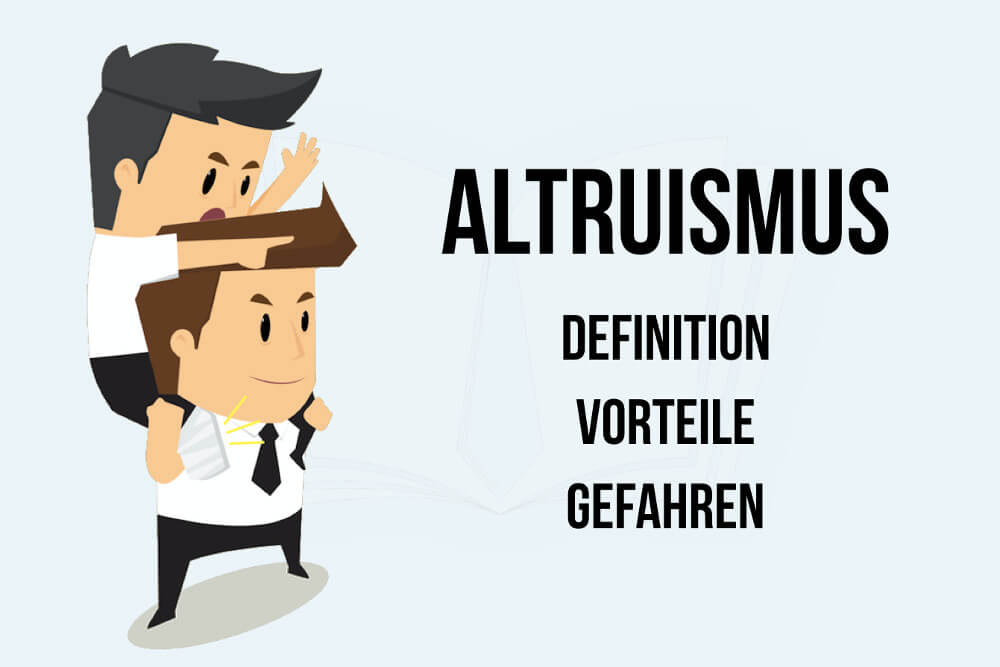 Definition: what is altruism?

Altruism is often equated with helpfulness. Although these two are related and partly belong together, they cannot be used completely synonymously. To describe the context correctly, it should read: Helpfulness is part of altruism, a characteristic and a behavior through which a person's altruistic intentions become clear.

Altruism is best described as the exact opposite of selfishness understand. It is an attitude and a way of thinking, but above all a behavior that shows itself to the outside world. There are always disagreements about a uniform and general definition, but the core of altruism can be summarized succinctly:

Altruism is the conscious, deliberate, and voluntary behavior of doing something for someone else without expecting any benefit from it.

Appropriate synonyms that are used more frequently in everyday language are selflessness or altruism. This already shows why the question raised at the beginning does not correspond to altruism: Whoever acts genuinely selflessly and only has the benefit of another person in mind does not care whether he himself may be at a disadvantage.

Altruism is characterized by the fact that no benefit expected and it is accepted that one has expenses or costs (which do not have to be financial) without getting anything in return. A true altruist does not care whether he is harmed as long as he has been able to help someone else through his actions.

Sounds really noble, but unfortunately it is also one absolute rarity.

Are you altruistic and willing to help others completely unselfish to stand by your side? In the first moment you will certainly answer with a clear answer Yes. This reaction arises from the mostly positive self-image that everyone has of themselves. As a rule, however, the question cannot be answered quite so clearly.

In other words, whether someone acts altruistically depends on various factors from. This ...

True altruism with no ulterior motive is rare

Not everything that looks like altruism is actually selfless behavior. In fact, in many cases, it's the exact opposite: Selfishness, manipulation and ulterior motives. The difference can be illustrated with two simple examples.

A classic example of altruism is a father who goes for a walk with his child. Suddenly it starts raining cats and dogs, but the two only have a small umbrella with them, which is just enough for one of them. Without hesitation, the father opens the umbrella and holds it over the child while he is completely soaked himself. All his thoughts and actions are aimed at keeping the child dry and protected. he doesn't expect anything from it himself, not even a thank you, and he absolutely doesn't mind the fact that he gets wet and possibly catches a cold.

This is altruism in its purest form. Now for the second example: A colleague comes to you and offers to take over your shift on the weekend because you had to work last Saturday. At first glance, this is also altruistic behavior, after all benefit from the nice gesture and the colleague has none of it.

A few weeks later, however, this very colleague arrives and asks you if you could take over his work on the weekend. He may not say it out loud, but of course you remember him standing in for you. So the idea behind this from the beginning was that he himself will need your help in a while. The Use for his actions was not immediately apparent, but it was certainly an ulterior motive.

This is exactly how it is very often in reality. By apparent altruism one's own intentions are camouflaged, although only one's own gain is thought of. Such calculating and insidious behavior annoys most of those affected even more, as they justifiably feel manipulated.

Even if you help others to receive their thanks and appreciation, do not act really altruistically, but pursue a clear goal and expect a benefit. For example, the desire for approval and confirmation can give the appearance of altruism, even though it only shows a lack of self-esteem.

Sayings and quotes about altruism

Advantages: How to benefit from altruism yourself

It sounds contradicting itself, because in altruism everything is geared towards benefiting others without receiving anything yourself. But even if that is your full intention and you actually have no expectations of your own, you can still benefit from it.

Without intending to do so, altruism has some benefits not only for others but also for yourself:

Dangers of Altruism: Don't Overdo It

However, there are also some dangers lurking in altruism, which you should approach with the necessary caution. First of all, you should take care of yourself not completely sacrificing for others and completely forget your own needs. Every now and then everyone has to think of themselves, especially for their own health.

You should also ask where your altruism comes from. Are you perhaps just looking for recognition and confirmation and are you trying to please everyone else? If this is the case, you not only run the risk of overwhelming yourself because you cannot say no and thus burden yourself more and more, but also one develop serious helper syndrome.

The best way to escape the risks of altruism is to find a healthy balance. Selfless behavior can be assessed positively, it can be part of your personality, makes you sympathetic and can bring you satisfaction. However, it should always be kept in moderation, because permanent altruism quickly turns into the opposite.

Other readers will find these articles interesting