What are differential gears

When cornering, the wheels of an axle have to cover different distances, the differential enables different wheel speeds and ensures an even distribution of the drive torque.

The differential was made around 100 BC. Invented in Greece where it was used in a mechanical planetarium, but fell into disuse and was later reinvented by Leonardo da Vinci. The differential gear that is common today for vehicles was invented in 1827 by the French Onésiphore Pecqueur.

A differential lock can be activated manually in poor road conditions. It overrides the differential and its compensation function. This lock is operated pneumatically. If the lock is now engaged, two rings and on one of the two shafts that lead to the wheel lock into place, thus locking the function of the differential. 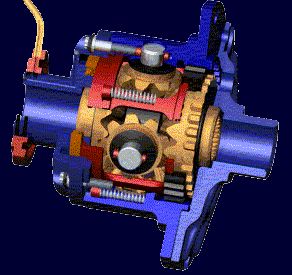 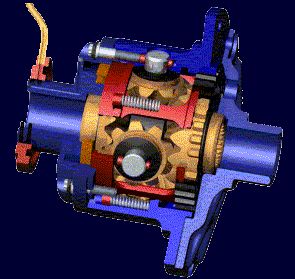 Like all limited slip differentials, the Torsen differential is in principle an open differential whose ability to compensate for the speed between the output shafts is impaired by suitable measures.

The first two types of Torsen are mainly represented on the market today:

At the Type a the differential gears (planetary gears) are designed as worm gears which mesh with the side gears (output) and whose axes are perpendicular to each other. The sliding movement in the toothing and the simple storage cause high friction losses, which generate the desired locking effect if a speed difference occurs on the output side.

At the Type B the axles of all wheels are parallel and the gearing is designed as helical gearing (helical gearing), hence the name 'parallel axle differential'. Here, too, forces arise in the toothing, with the desired friction mainly occurring between the housing and the end faces of the gears.

The Type c is designed as a planetary gear and can be combined with an open differential to form a compact unit.

Type A achieves much higher locking values ​​than type B. As with all torque-sensing differentials, they have the disadvantage that propulsion can no longer be generated when the wheel is raised. Nevertheless, their ESP compatibility and their influence on driving dynamics are advantageous in the sporting field. 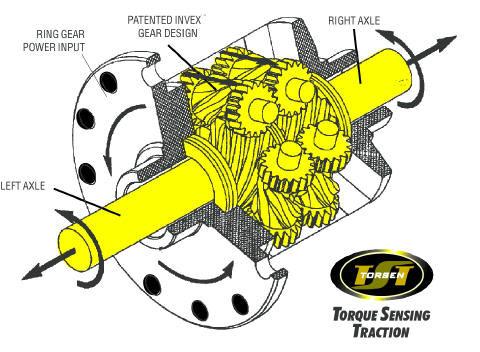 Function of a differential gear: http://static.howstuffworks.com/flash/differential.swf