What is the frame rate in the receiver

This chapter provides an overview of the most important methods for recovering the audio signals from the analog TV broadcast signal. The older differential carrier or intercarrier method, the improved quasi-parallel tone method and parallel tone method as well as the common method with the television stereo / two-tone decoder are dealt with

The TV receiver is tuned to the transmitter frequency of the video carrier. The sound carriers TT1 and TT2 are arranged on the transmitter side with a precisely defined frequency grid above the video carrier. All receiving devices work according to the superimposition principle as IF or intermediate frequency receivers. When searching for a station, a tuner oscillator, which oscillates above the station frequencies, is tuned parallel to the tuner oscillator so that the frequency difference between the station and the oscillator remains constant at all times. Both frequencies experience an amplitude modulation in a mixer stage, from which the lower sideband is filtered out as the 1st picture IF. 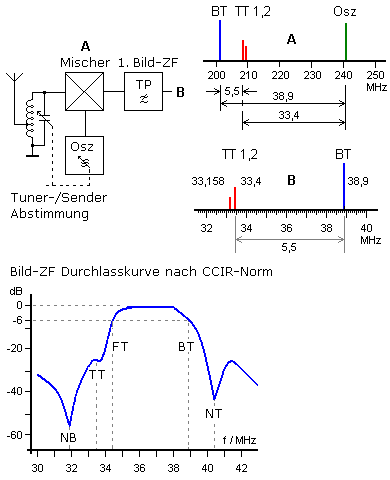 The picture shows the transmission curve of the picture IF filter in a logarithmic representation. The two strong reductions are frequency traps for the neighboring sound carrier NT and neighboring picture carrier NB of the next higher transmitter channel.

The intermediate frequency method has the advantage that only one type of filter with the same bandwidth is required for all transmitter channels. The bandwidth of the IF filter is selected so that all image and sound information from the selected transmitter is available to the receiver. A further separation is possible because the sound in FM, frequency-modulated and the picture information in AM, is amplitude-modulated. In the 1st picture IF, the bandwidth of the sound carrier is below the picture carrier IF.

The frequency-modulated sound carriers are contained in the picture IF. The video information is amplitude-modulated on the video carrier and can be recovered to the BAS or FBAS signal by demodulation on the video rectifier. Distortion occurs on the curved diode characteristic, which corresponds to a mixture or modulation. Ultimately, demodulation can also be seen as modulation with its own carrier frequency. The picture carrier IF forms sum and difference frequencies with the intermediate frequencies of the sound carriers, with the associated information bands of the TT IF being retained in the new modulation products. With the downward modulation also used here, a new IF level is created for the audio signal.

The differential carrier method, also called intercarrier or intermediate carrier method, is the oldest method for sound separation. As can be seen in the picture, a downmixing of the 38.9 MHz BT-IF - 33.4 MHz TT1-IF results in a new 5.5 MHz Ton1-IF on the video diode. The TT2 IF is then in the tone IF level at 5.742 MHz. Both intermediate frequency carriers are frequency-modulated with the audio information. The Ton2-IF contains the operating mode identifier, the pilot tone and stereo information as AM signals. The sum frequencies above 70 MHz, which also arise during video demodulation, are safely suppressed by the audio IF filter.

With video demodulation, image and synchronous signal components also get into the difference frequency of the audio IF. Because in FM the low-frequency information is encoded in the zero crossings of the HF oscillations, this amplitude interference can be removed by limiter amplifiers before FM demodulation. This is followed by FM demodulation for audio NF. For stereo and two-tone reception, the AM modulated carrier information must be evaluated at 54.6875 kHz.

The differential carrier method has the disadvantage that there must always be a residual image carrier in order to ensure the formation of the 5.5 MHz audio IF. If black text is faded into a very bright part of the image with peak white, the filter curves may swing through when switching between black and white. If the BT fails briefly, a so-called intercarrier hum disrupts the audio signal.

One of the advantages of the intercarrier method is the low level of circuit complexity. No further HF oscillator is required to generate the tone IF. Likewise, inaccuracies in the frequency of the tuner oscillator do not affect the audio channel. With good picture reception, good sound reception can also be expected.

At the output of the mixer stage of the tuner, the image IF signal is processed in a special way by surface acoustic wave filters (OWF) for the video and audio branches. In the video branch, the OWF attenuates the audio IF range and thus only allows the image information to pass. The subsequent signal processing remains unchanged. The picture IF is amplified and demodulated in the AM demodulator to form a composite signal.

The surface acoustic wave filter at the entrance of the audio branch has resonances in the area of ​​the IF sound carrier and in the area of ​​the IF picture carrier and attenuates the frequencies in between by around 20 dB. The further signal processing takes place in integrated circuits. The audio IF, video IF signal processed by the filter passes through a regulated IF amplifier and then controls a 38.9 MHz synchronous demodulator. As with the differential carrier method, the two tone IF carriers are formed with 5.5 MHz for tone IF1 and 5.472 MHz for tone IF2. 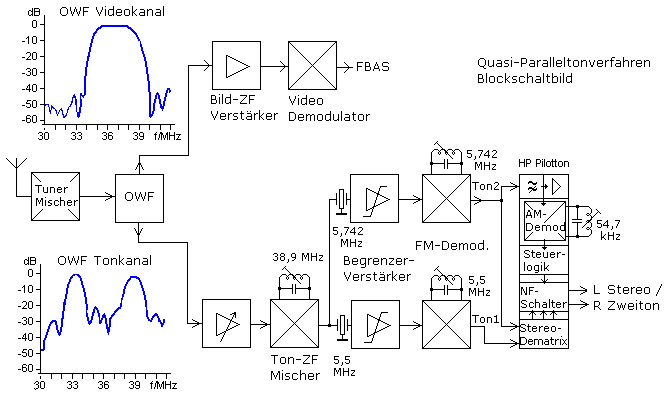 The tone IF1 signal passes through a ceramic filter tuned to 5.5 MHz, a limiter amplifier and is then demodulated into the NF Ton1 mono signal or the stereo sum signal (L + R) / 2. The tone IF2 signal is also amplified after a 5.742 MHz ceramic filter, limited in amplitude and demodulated to NF Ton2 in an FM demodulator stage tuned to 5.742 MHz. The output signal with mono tone2 or 2 · right in stereo and the still modulated identification signals are evaluated in the stereo decoder and a further control logic. In stereo, the L and R signals control the audio output stages. In the two-tone process, the input signal of both power amplifiers is either Ton1 or Ton2.

The quasi-parallel tone process is similar to the intercarrier process without its disadvantages. Due to the special characteristics of the input filter and the amplification before downmixing, there is always a sufficient picture carrier IF amplitude and the audio carrier IF cannot fail. Intercarrier disruptions do not occur. The signal to noise ratio of the audio channels has improved. The quasi parallel tone process (QPT) is absolutely necessary for two-tone and stereo reception. The transmission level of the second sound carrier is 7 dB lower than that of the first sound carrier. Without sufficient amplification before mixing to form the audio IF, reliable signal processing in the quasi-parallel tone method would not be possible.

It seems to be the oldest method, but initially had problems with stable, good sound reception. Immediately after the tuner mixer stage, the video carrier IF and audio carrier IF are separated. This method requires a particularly high frequency stability of the oscillator for the mixer stage. Small fluctuations in the oscillator frequency are hardly noticeable in the broadband video channel. The same frequency shift in the audio IF leads to audible quality losses in the narrowband audio channel, since the transmitter is tuned to the video carrier. In the early days, all IF filters were designed to be adjustable with separate coils and capacitors, the long-term stability of which was not given. 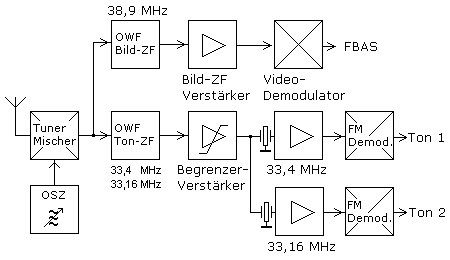 With the use of ceramic or quartz oscillators and control stages and special surface wave filters OWF, stable frequencies with good long-term stability result, which enable optimal signal separation. Image and audio IF are processed directly in parallel without forming the difference frequency. There is no longer any mutual influencing of the image and sound frequencies. The bandwidth of the 1st tone IF covers both sound carriers with (33.4 and 33.16) MHz. This is followed by the signal processing described in the QPT process up to the audio output stage. 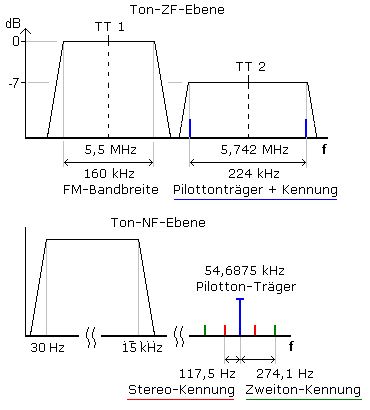 The TT2 is at a distance of +5.7421875 MHz from the BT, with the difference frequency between the two TTs being linked to the horizontal frequency via fHor · 15.5. The TT2 has the same modulation data as TT1. In the case of mono broadcasts, it contains the mono signal Ton1, in the case of stereo the information of the R channel and, in the two-tone process, the mono signal Ton2 also contains an amplitude-modulated signal with the current operating mode identifier.

Both audio AF signals still pass through the deemphasis, low-pass filters with 50 µs. The stereo signal for the left channel arises from the twice amplified sum signal and the integrated R signal in the adder stage. In the switching matrix, the signal paths A, B and C are closed by the stereo identification signal and the amplifiers receive the stereo L signal at the top and the stereo R signal at the bottom.

In the case of mono broadcasts without two tones, both sound carriers are modulated with the mono signal Ton1. The switching matrix in the block diagram keeps signal paths A and D closed, which means that both output stages are supplied with the same signal in mono. If two-tone broadcasts are detected, either Ton1 or Ton2 can be switched to the output stages as a mono signal. Two-tone1 corresponds to the mono signal Ton1. With a more complex switching matrix, the two-tone signals can also be switched individually to separate outputs for loudspeakers and headphones.