Some are sure to be wondering "What is TikTok?" moved to the text.
And for some time now, parodies of the various trends have been circulating on this platform. 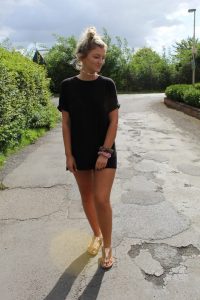 Let's just start - the VSCO girls.
Some of you may still know the Tumblr girls from back then, they are pretty much the same. VSCO girls dress pretty basic, they often wear oversized T-shirts with shorts, which are definitely not allowed to be seen, or oversized hoodies with mom jeans. A very special feature, however, are the popular "scrunchies", the large hair ties from the 90s, only today they are used less often as hair ties and more often as bracelets. Shell necklaces are also often brought back from the 90s as additional jewelry. The make-up of the VSCO girls is quite subtle and natural, mostly just a little foundation and mascara. The hair is often worn in a loose bun to match the look. 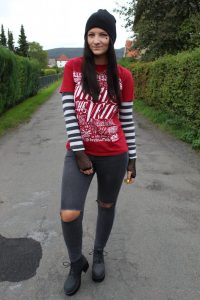 We come to the second group - the e-girls.
This look could be familiar to girls my age, because in my teenage years these girls were still called scene girls (and yes, I also had a phase like that).
The e-girls often wear T-shirts, preferably with a logo or cartoon print, and a long-sleeved shirt underneath. This is combined with dark ripped jeans, boots and beanies. When it comes to jewelry, they often use thick silver chains, whether around their necks, wrists or trousers.
E-girls use dark colors and thick eyeliners for make-up. Often small hearts or crosses are also painted under the eye.
The hair is mostly black, but also dyed in bright bright colors. 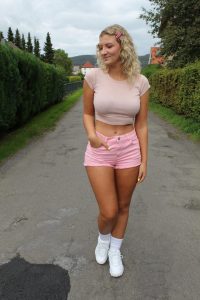 The third and last group that I address are the soft girls.
The soft girls are pretty much the exact opposite of the e-girls. They dress in bright colors and pastel tones and thus achieve a childish look.
Let's start with the outfit, as already mentioned it has to be colorful. Most of all, of course, pink and pink are preferred, but yellow is also very popular. The standard outfit consists of a crop top and a tennis skirt or a plaid school girl skirt. It is rounded off with white sneakers and white or colored socks that you can clearly see.
When it comes to accessories, they use colorful and eye-catching hair clips, but several of them are clearly placed.
The make-up is very colorful and pink, similar to the outfit. Here it really means more is more, because you can use a lot of blush, and this can also be used as an eye shadow.

Well, which of the three groups would you consider yourself to be?
I would definitely lean towards the VSCO girls as they pretty much match my style.