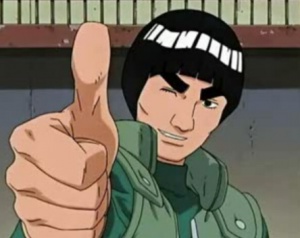 Might Guy is a Jōnin from Konohagakure and Sensei from Rock Lee, Neji Hyūga and Tenten. His hallmarks are his thick eyebrows and the nice guy pose he uses when making a promise. In combat he only uses Taijutsu and calls himself "Konoha no Kedakai Aoi Mōjū" (木 ノ 葉 の 気 高 い 碧 い 猛 獣, "Konoha's sublime green predator").

Guy is an exceptionally disciplined and determined person. He often sets high standards and mourns lost missions. To prevent this from happening too often, he trains very hard and often goes beyond his limits. He often reflects on the strength of youth and walks through his life with this attitude. Mostly he appears as a sympathetic and friendly person, but often seems clumsy and difficult to understand. When he met Kisame Hoshigaki, he did not recognize him at first. In serious situations, however, he shows himself to be a serious Jonin.

Guy has his own rule, which to the neutral observer usually seems strange and childish. It's based on getting better through hard training. He does this by trying to put himself in a situation of increasing pressure. For example, if he loses to Kakashi in one discipline, he will run 500 rounds on the hands of Konoha. As a result, he will be able to defeat him the next time, as he will be more focused. And even if that doesn't work out, he's still able to train harder by setting higher and higher goals.

The anime shows that Guy's rivalry with Kakashi began at a young age. Back then, however, Guy was often defeated by Kakashi.[1]

When Kurama attacks Konoha, Guy is out with Kakashi. A little later they are brought to safety together with other young ninja.

When Rock Lee tried to use Omote Renge against Sasuke Uchiha, Guy stopped him. He punished him and forbade him to use this kinjutsu because it was immoral. As the tournament progressed, Guy watched his students. He was very sad about Tenten's loss to Temari. When he saw Neji's fight against Hinata, he was disappointed that Neji wanted to kill her and was ashamed of him. Before the Gaara vs Rock Lee fight, Guy Lee gave some tips and explained Gaara's skills to him. When the fight was over and Gaara wanted to kill the defeated Lee, Guy intervened and disqualified Lee. He said to Lee that he would always take care of him. When Orochimaru attacks Konoha, he is seen fighting enemy ninjas together with Kakashi.

When Akatsuki members Kisame and Itachi tried to infiltrate Konoha, Asuma, Kurenai and Kakashi stopped them. The fight evolves in the Akatsuki's favor as Kakashi was trapped in Itachi's Tsukuyomi. That changed when Guy stepped in and attacked Kisame and Itachi before Kisame could kill Kakashi with Samehada. He put the two of them on the run and returned to Konoha.

Guy after the time jump 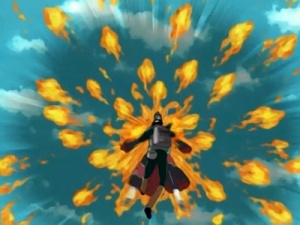 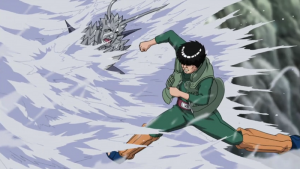 When Deidara abducted Gaara from Sunagakure, Guy's team was sent to Sunagakure to support Team 7. On the way there they were stopped by Pakkun, who was supposed to show them Akatsuki's hiding place. On the way, however, they were stopped by Kisame, who stood in their way. However, Guy did not recognize him immediately. A fight then broke out, which Kisame initially had under control. However, when he used Suiton: Suirō no Jutsu against Tenten, Lee and Neji, Guy opened his six gates and defeated Kisame with Asakujaku. To their regret, however, they found that the person killed was not Kisame but Mukade.

When they finally got to the Akatsuki hideout, Team 7 and Chiyo also arrived. Kakashi found that the entrance was closed with a very strong seal. So Team 9 split up to remove all seals at the same time. However, after severing the seals, doubles of them, who have exactly the same looks and abilities, appeared out of the ground. They fought against them and finally defeated them. In the end, they returned to Konoha.

During Pain's attack on Konoha, he and his team are on their way back to Konoha.

He later accompanies Naruto to the island in Kumogakure, where he and Killer B are hidden from Akatsuki. There he is attacked by Kisame, who pretends to be his dark self. When Guy realizes that this is really Kisame, he attacks him with Konoha Kaiganshō. Kisame is caught, but shortly afterwards commits suicide. Shortly thereafter, Guy is assigned to the Sentō Kinchūkyori Butai and fights with this against the Kiri no Shinobigatana Nananin Shū. After defeating the dead, he and Kakashi come to help Naruto and Killer B in the fight against Tobi and the dead Jinchūriki. 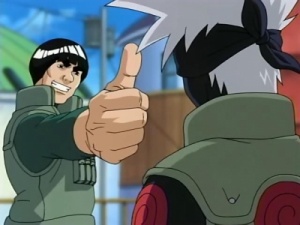 Guy and Kakashi are friends, but also rivals, according to Guys. Since Kakashi was a genius and Guy was a less talented ninja, he sees Kakashi as his rival to surpass.[2] He also tries to tell Kakashi this, but Kakashi is rather uninterested. This reaction always makes Guy jealous and he calls it "hip" for Kakashi to say that. The two regularly have some kind of competition in different disciplines, through which they try to find out who is the stronger of the two. But Kakashi does not seem to care about this either, for example he chooses a rock-paper-scissors competition in order to end the matter quickly. The current score is 50:49 for Guy. Before each discipline, Guy makes his own rule and promises to complete a particularly tough training exercise if he should lose. This attitude impresses his student Lee and he resolves to become just like his mentor.

Guy's most important person is his student Rock Lee. Lee sees Guy as a role model and wears his hairstyle and suit. Outwardly, their thick eyebrows are what they have in common. He also copies some of his sensei's behaviors, such as the nice guy pose and his own rule. The two have a very close relationship, and Lee is quick to get angry when someone speaks disparagingly about Guy. Lee's dream of becoming a great shinobi with just Taijutsu has been Guy's dream since Lee managed to run several laps on his hands around Konoha with him. He promises to devote his life to Lee's dream and henceforth often calls him his beloved student. He also says that Lee is a genius at hard work. After Lee is so badly injured by Gaara that Lee has only a 50 percent chance of surviving an operation, Guy tells him that if Lee died, he would see no reason to go on living.

Guy becomes a genin at the age of seven and a chūnin at the age of eleven. He mainly specializes in Taijutsu. As a result, his speed and power are greater than other ninja. However, he seems to be able to use Ninjutsu and Genjutsu as well. Why he mostly forego this is unknown. The reason for this assumption is that he is able to dissolve genjutsu, as he did during the final round of the Chunin selection test. He also masters Kuchiyose no Jutsu, as he conjures up Ninkame after a fight between Sasuke and Rock Lee. Guy is also able to recognize the opponent's movements based on the movement of his feet. He learned this technique in order to be able to fight better against KakashisSharingan. He can open all eight hachimon, as well as sekizō and yagai. He is also capable of dealing with Ningu. So he uses in the fight against Kisame nunchaku and in the fight against Obito Sōshūga. 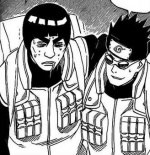 Aoba and Guy on the island
<?