Can global warming be controlled by us? 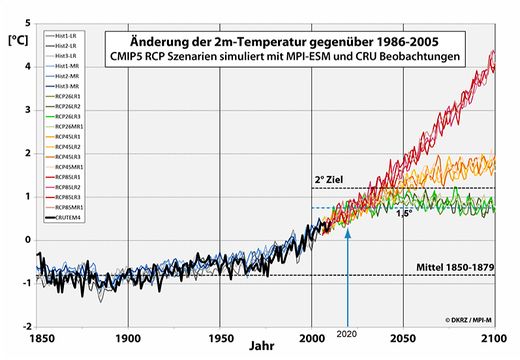 Fig. 1: Temperature changes up to 2100 according to various IPCC scenarios and the 2 or 1.5 degree target.

In climate policy there is a broad consensus that if global warming is limited to 2 ° C or, more recently, to 1.5 ° C above the pre-industrial value, a dangerous disruption of the climate system by humans can just be avoided. If the 2 (1.5) degree limit were exceeded, the consequences of climate change would no longer be controllable. Extreme weather and other climatic consequences would become dangerous and unmanageable and would cause the economic costs to rise unacceptably high.

The so-called 2-degree target, as a political target formulation, goes back to a proposal by the EU from 1996, which was repeated in 2005 and later taken up by numerous international organizations.[1] The German Advisory Council on Global Change (WBGU) played an important role in establishing and designing the 2-degree target.[2] In 2009 the goal was taken up in the final document of the UN climate conference in Copenhagen, but remained non-binding. At the United Nations World Climate Conference from November 30 to December 12, 2015 in Paris, a follow-up agreement to the 1997 Kyoto Protocol with binding climate targets for all 195 member states of the UN Framework Convention on Climate Change was agreed (The Paris Agreement).[3] The goal was set to limit global warming to well below 2 ° C, ideally even to 1.5 ° C above the pre-industrial level. In this way, dangerous consequences for human society and natural ecosystems are to be averted.[4]

The Paris Agreement applies to all countries, not just like the Kyoto Protocol to just a few industrialized countries. Almost all countries in the world have defined national climate protection goals within the framework of the agreement, but they have determined them themselves. Poorer countries should be helped with the implementation through knowledge and technology transfer. Every five years, new, more ambitious goals are to be presented. This was a response to the changed situation since the Kyoto Protocol, which today only covers 15% of global emissions. At that time the industrialized countries still caused more than half of the emissions, today it is only a third.[5] 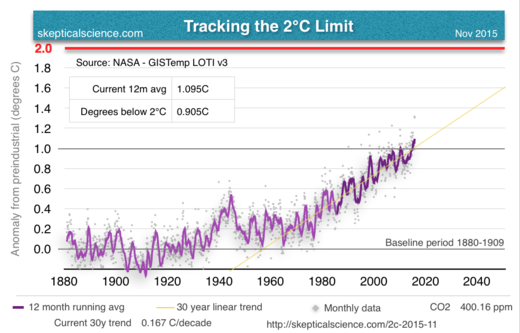 2 What does the 2-degree target mean?

The 2-degree target means that the global mean temperature will rise above the pre-industrial level (Fig. 1). So it's not about how many degrees Celsius the temperature can still increase compared to today. The global mean temperature is currently already 1 ° C above the pre-industrial level. It cannot be ruled out that the emissions that have occurred to date could cause further warming of up to 0.5 ° C in the next two to three decades.[6] The inertia of the climate system, i.e. above all the slow reaction time of the ocean, has so far delayed the temperature rise above 1 ° C. If the current trend (Fig. 2) continues at 0.2 ° C per decade, 1.5 ° C will be reached in the period 2030-2052. Even with a total stop of the current emissions, the previous warming will persist for centuries to millennia. 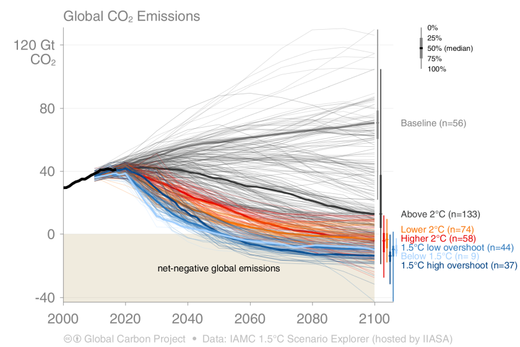 Fig. 3: CO2Emissions to comply with the 1.5 or 2.0 degree limit by 2100. On the left are the annual CO2Emissions specified. The thin lines show different model calculations, the thick lines mean values. In almost all cases, negative emissions are necessary to meet the Paris targets. 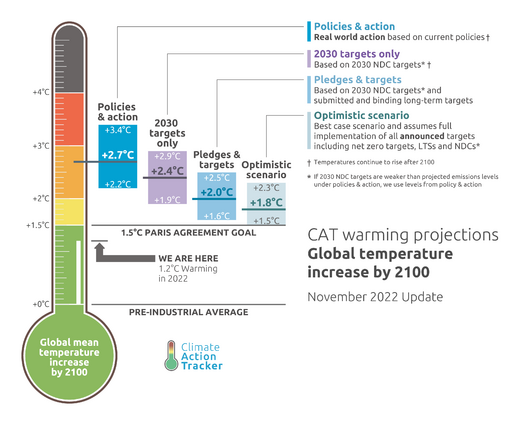 An important question in this context is the total budget for CO2-Emissions that must not be exceeded from today to achieve the 2.0 / 1.5 ° C target. So the question: How many billion tons (abbreviation often: Gt = gigatons) of carbon dioxide can still be emitted by human activities up to a certain point in time, without the limit of 2.0 or 1.5 ° C by the end of the 21st century. Century. The focus is on emissions from burning fossil fuels, because they have by far the largest share of all greenhouse gases and show the strongest increase. CO2-Emissions from changes in land cover (deforestation, etc.) and other greenhouse gases such as methane and nitrous oxide will, however, also play a role in the temperature increase in the coming decades and should therefore not be neglected. Due to the long retention time of carbon dioxide in the atmosphere, the cumulative emissions to date since the beginning of industrialization must also be taken into account, which already amount to 2200 Gt CO2 amount to.[7]

Currently the CO2-Emissions approx. 42 Gt CO2 yearly. If nothing changes, the remaining budget would be used up by 2030. All of a sudden humanity would have to have all CO2-Stop emissions so as not to exceed a temperature rise of 1.5 ° C. Since this is unthinkable, a radical reduction in emissions to almost half in 10 years should start immediately. According to the Scientific Advisory Board on Global Change (WBGU), global warming can only be limited to well below 2 ° C if the global CO2-Emissions "peak around 2020".[8] If this does not succeed, and this can be assumed, only so-called “negative emissions” will help. This is understood to mean the subsequent removal of carbon dioxide from the atmosphere through measures such as afforestation, carbon capture and storage or ocean fertilization. With the exception of afforestation, these climate engineering measures are technically not fully developed and their effects are highly controversial.[9]In any case, climate model calculations come to the conclusion that otherwise the desired limitation of global warming cannot be adhered to (Fig. 3). In its report, the Intergovernmental Panel on Climate Change (IPCC) also assumes the need to use negative emissions in the second half of the century.

The Paris climate protection agreement aims to limit global warming to 1.5 ° C. The commitments that the individual states have entered into on a voluntary basis to date, however, amount to a warming of 3.0 ° C by the end of the 21st century. If one assumes that not all states also adhere to their commitments and that the USA has already withdrawn from the agreement, the value is likely to be even higher (Fig. 4).

4 Which climate developments can be expected? 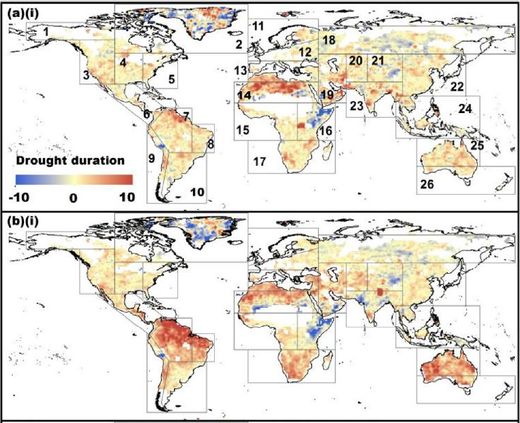 Fig. 5: Change in drought duration in months at 1.5 ° C and 2 ° C global warming (classification of the earth according to regions in the source)

It is difficult to predict whether dangerous climate change can actually be avoided with global warming of 1.5 ° C or 2 ° C. A global warming of 1.5 or 2 degrees does not mean that this limit will be adhered to everywhere on earth. The temperatures over the oceans, where practically no people live, will probably rise significantly less, while those over the continents with their dense settlements will in large parts cross the border strongly.[10] With a global rise of 1.5 ° C, the temperature rises are very different from region to region: In the USA it would be 2 ° C, in central Brazil 2.3 ° C and in the Arctic even 4.2 ° C.[9]

All the more extreme events, which already today often clearly surpass earlier events, will continue to intensify. Even with a warming of 1.5 ° C, it is to be expected that extremely hot days in the middle latitudes will be up to 3 ° C warmer and their number will increase. If the temperature increased by 2 ° C, extremely hot days would even be up to 4 ° C warmer. Droughts and precipitation deficits will also increase, also more with global warming of 2 ° C than with 1.5 ° C. This also applies to heavy precipitation during tropical cyclones. The sea level will rise by 26-77 cm at 1.5 ° C by 2100, at 2 ° C by 10 cm more. With an additional increase of 10 cm, 10 million more people would be affected. Even after 2100, sea levels could rise by several meters for hundreds to thousands of years, primarily due to the instability of marine ice sheets in Antarctica and losses of the Greenland ice sheet. This endangers particularly low-lying coastal areas and deltas as well as low islands. Ocean temperatures and acidification will also continue to increase. As a result, coral reefs will decline by a further 70-90% at a global temperature increase of 1.5 ° C, and by as much as 99% at 2 ° C.[7]

Likewise, the risks to human nutrition, water supply and health will continue to increase with global warming of 1.5 ° C and more at 2.0 ° C. For example, maize, rice and wheat yields will decline, especially in sub-Saharan Africa, Southeast Asia and Latin America. The problems with the water supply will increase critically, especially in the arid regions, with a warming of 1.5 ° C, but only half as much as at 2.0 ° C. The already existing health risks from climate change will also increase with further, albeit moderate, warming. This applies in particular to heat-related risks in urban heat islands, but also to vector-related diseases such as malaria and dengue fever, the areas of which are set to expand.[7]