Should I combine Forex with other markets?

A closer look at the movements of a currency within a day can help to deepen the understanding of the dynamics of this market. Traders examine forex price movements in different time frames depending on their personal trading goal. For longer-term trades, price movements on a micro level are less important, but for trades in shorter time frames they are of great importance. So-called micro-price movements can best be determined in 5-minute, 1-minute or tick charts. These charts show special course activities, with the help of which one can determine the correct entry and exit points with great certainty. The following article introduces the most common approaches to micro-price movements in the Forex market and explains, using specific examples, how they can be meaningfully traded.

The number and direction of price ticks can provide an indication of whether short-term market sentiment is bullish or bearish. For example, repeating sequences of three to eight pips in one direction can be considered strong confirmation. If, for example, a currency pair is massively sold off and any recovery approach is stalled by several downward sticks, one speaks of a bearish sentiment. Conversely, if the price repeatedly rises by many ticks, there is a bullish sentiment.

Immediate tick reversals can also serve as an indicator of sentiment. If prices keep starting in one direction, but each time there is a short-term move in the opposite direction, this is an important indicator, especially in the vicinity of resistance or support. Attempts to break a support or resistance repelled by multiple ticks (usually two to five) indicate that this level is likely to be held.

The tick movement is also useful for measuring the change in sentiment when a reversal is imminent. Often the course tries to reverse, but is then pushed in the opposite direction and finally ends in a pause, which indicates indecision and thus a progressive change in sentiment. Although this cycle of declining conviction, indecision and reversal also occurs in other markets, it occurs more intensely in the forex market, since the price can fall or break even without external influences such as news.

The 5-minute chart is best for measuring micro-price movement based on the closing price of a bar or candle. For example, we have a 5 minute candlestick with a positive close, followed by a strong upward movement. This indicates that many traders have waited to see whether the 5-minute interval actually closes higher before opening a long position. On the other hand, if the closing price is negative and is followed by a further downward movement, the sentiment is bearish.

In Image 1 a large positive candle is shown, which shows a sudden price increase and thus indicates a positive mood. However, if this rise is followed by a negative candle of about the same length (a so-called "counter candle"), at which the price surrenders almost all of its profit, this is probably a sign of a short-term bearish sentiment. Counter candles can also be a sign of a bullish reversal when a large bearish candle is followed by a similarly sized bullish candle.

Image 1. Counter Candles. Here you can see the EUR / JPY currency pair on a 5-minute chart. The large bullish counter candle after the red candle of about the same length shows a sudden price increase and thus indicates a trend or sentiment reversal. Similarly, the bearish counter candle signals a downward trend or sentiment reversal after the white candle of about the same length. 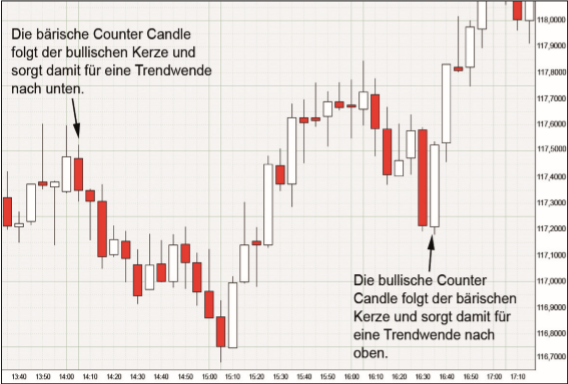 For example, if a sharp rise is followed by a similarly strong downward movement (in the same candle), it would result in a long upper shadow. This indicates a short-term resistance that would have to be overcome for a further increase. Similarly, a downward move followed by an upward thrust would create a candle with a long lower shadow indicating support. The more often these two different movements are repeated, the safer the resistance and support zones are.

Photo 2. Long candle shadows. Here you can see the currency pair USD / JPY in the 5-minute chart. Long candlestick shadows can both indicate a change in direction and define areas of support and resistance. A candle with a long lower shadow signals an upward trend reversal and thus generates a buy signal. A candle with a long upper shadow indicates a downward reversal and thus generates a sell signal. 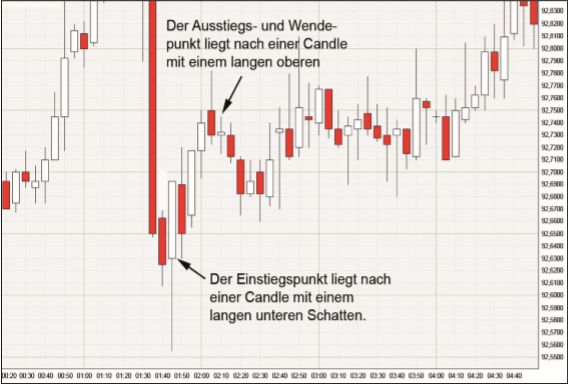 Like all other technical analysis tools, candle shadows should always be interpreted in the context of the respective trend. If the direction indicated by the shadow coincides with the longer-term trend, there is a higher chance that the trend will be longer in that direction. In contrast, the direction indicated by the long shadow, if it is contrary to the long-term trend, is still valid, but no longer as reliable as an indicator of the future direction.

A price spike is a sudden and noticeable movement in price in one direction. Such peaks come in all sizes: from very small (five to ten pips) to very large (100 or more pips). But even small peak movements can be a sign of future course directions.

A small high (low) in a sideways movement indicates that movement is likely to continue towards the top. However, when an upward spike appears in an uptrend, the price usually falls below the price spike again before returning to it and rising further up (picture 3).

Figure 3. Spikes in an uptrend. Here you can see the EUR / JPY currency pair in a 1-minute chart. An upward spike appears in an uptrend. Before the price continues to rise, however, it first falls below this peak and then returns to it. Then he continues upstairs. 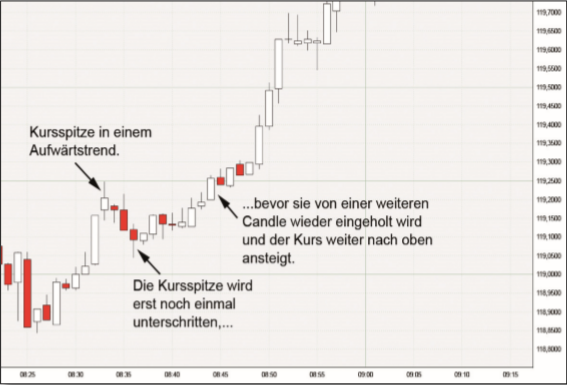 A reversal is indicated when a slow and steady decline in price over a short period (for example 30 to 60 minutes) is suddenly interrupted by an upward spike of ten to 15 pips (called a "rebellion spike"). Or vice versa, when the price makes a slow and steady rise with a sudden downward spike, which is often a sign of a short-term high.

Picture 4. Rebellion Spike. Here you can see the EUR / JPY currency pair in a 5-minute chart. A trend reversal often occurs when a persistent trend is suddenly interrupted by a rebellion spike pointing in the opposite direction. The candle with a long lower shadow is followed up by a 10 pip rebellion spike. This generates an upside reversal and a buy signal for a Long ScalpTrade. 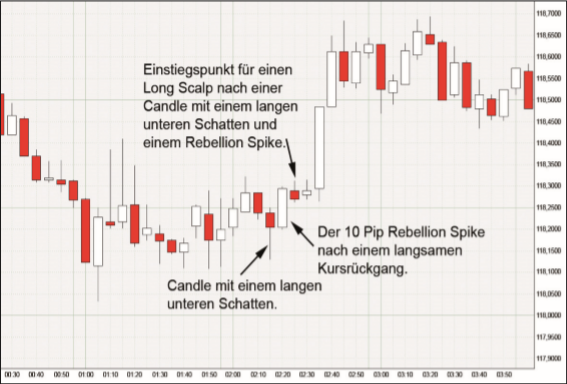 The application of micro-price movements is particularly suitable for making entry and exit decisions at support and resistance levels. These are regions in which there is often little or no indication of the further course development. The right decision at such points can result in considerable profit.

Once the price has reached support, the up and down tick movements should be watched closely. Watch out for Pic 5: The price reaches the support and an attempt is now made to maintain this support by means of slight upward movements. As you can see, this also works at first. There is even a sudden rise away from the support point. But a short time later it goes back to the critical support point before the course finally drops. This movement is a clear indicator of the weakness and the likely sustained downtrend in the price and thus generates the entry point for a short scalp trade.

Figure 5. Support and resistance points. Here you can see the currency pair USD / JPY in the 1-minute chart. The price reaches a short-term support zone, from which it rises briefly to the upside. However, after returning to this support point, the price drops sharply to the downside. This speaks for a sustained downtrend and generates the entry point for a short scalp trade. 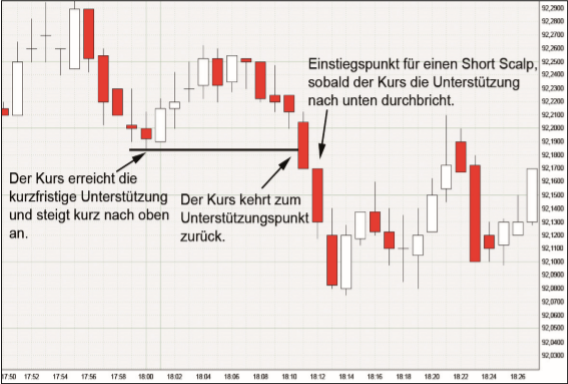 Micro-price movement studies are a valuable analytical tool for forex traders. They indicate possible trend reversals and generate reliable buy or sell signals. Especially in combination with other patterns (for example a long lower shadow with a rebellion spike) they provide strong reversal signals.

They can provide assistance under different conditions, both in times of low volatility and little turnover as well as in the opposite scenario or when publishing news. These conditions change depending on the time period or currency pair being examined.

A combination of several indicators is usually more reliable than a single indicator. For this reason, micro-price movement should always be used in conjunction with other technical analysis tools such as a moving average.

At least as important for successful Forex trading is the correct understanding of short and long-term trends of a currency pair and the respective fundamental sentiment. In addition, every forex trader should familiarize himself with the price and volatility characteristics of his currency pair and observe and analyze them closely. Source: Traders' Mag.