A basic distinction is made between air enemies and soil enemies. As the name suggests, these strike either from the air or from the ground. Depending on which enemies prevail in the area, you should choose the fuse for your flock of chickens. A safe stable has top priority. 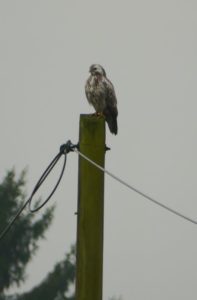 The hawk is a day robber found in both rural and urban areas. It can be extremely dangerous for the bantams. Therefore one often speaks of the goshawk.

The female hawk, in particular, can cause great damage. With an average of 1400 grams, it is almost twice as heavy as the male hawk. While the male mainly kills small birds, the female also hunts chickens, pigeons and rabbits. The hawk takes advantage of the element of surprise. It often lurks in secret, on a hide, and then appears out of nowhere to plunge into its prey. This is grabbed with the claws and killed. The hawk then uses its pointed beak to pluck the meat from the dead chicken.

The sparrowhawk also always hunts out of hiding during the day. It is therefore difficult to find him. He's sitting on a raised point somewhere, watching the terrain and waiting for the right moment to strike. He is a skilled and quick hunter.

The female sparrowhawk is often confused with the male hawk. But you can clearly distinguish them by looking at the eyes (as long as you get close enough). While the hawk's eyes are orange, the sparrow's eyes are yellow.

ᐅᐅ tip:Protect your bantams from air by providing adequate cover and installing a bird protection net!

Foxes not only live in the country, but are also increasingly common in cities. Their main prey are mice, but they also hunt rabbits and chickens.

The fox usually hunts at dusk or at night and is therefore rather inconspicuous. During the rearing season of his young in spring he also goes looking for food during the day. He scouted the area for weeks. He also digs under fences or climbs up on them.

Especially at night, our bantams are at the mercy of him without a secure barn, as chickens do not move in the dark. Foxes kill their prey by biting their necks.

Martens are nocturnal. They only come out of their hiding place in the dark and then go to catch prey.

They are excellent climbers and are particularly feared by chicken farmers because they can squeeze through the smallest crevices. If the marten penetrates through a gap in the stable, it causes a real bloodbath.

Only rarely do animals survive this attack because their fluttering further heats up the marten's killing reflex. Usually only 1 - 2 chickens are eaten, the rest are left behind.

You are reading: Enemies - a threat to the bantams