Is there a radical test

Modern laboratory diagnostics enable both the early detection of diseases and timely therapy and thus contribute to your health.

A simple blood test can provide assurance about the balance between free radical oxidative exposure and antioxidant potential:

BAP test:Biological antioxidant potential.
The BAP value provides information about the state of the body's own antioxidant defense system against free radicals. The test shows how well the body is able to render free radicals harmless in order to protect itself from damage. At the same time, a possible lack of antioxidants is determined. 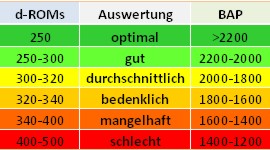 d-ROMs test: Free radicals, mostly oxygen radicals, react with organic molecules in the body, creating so-called ROMs (Reactive Oxygen Metabolites) as by-products. ROMs are relatively more stable than their precursors, the free radicals, and have a medium oxidative potential. A main component of the ROMs are hydroperoxides, which, due to their special properties, can be determined with the d-ROMs test. In the presence of a transition metal, which in turn acts as a catalyst, these generate free radicals, which are "captured" with a chromogen for measurement. On the basis of the available scientific literature, the d-ROMs test, in the context of its determination, was tested in almost all relevant fields of human medicine.

BAP test: The BAP test allows a reliable determination of the antioxidative potential, the part of the plasma barrier that is directly affected by oxidation, due to its reduction / oxidation potentials under "physiological" conditions.
In the blood, the so-called antioxidant plasma barrier guarantees a defense against harmful attacks by reactive species and especially against free radicals. This barrier has both exogenous - z. B. vitamin C, E, carotenoids, bioflavonoids etc. - as well as endogenous - z. B. proteins, bilirubin, uric acid, cholesterol, GSH etc. - components. Each of these components has its own antioxidant potential (or capacity). Depending on their reduction / oxidation potential, they can counteract attacks by reactive species in different ways. Such a capacity is linked to the ability of individual components from the plasma barrier to release so-called reduction equivalents to free radicals - i.e. either electrons or H atoms - and thus to prevent the dissociation of H atoms from biomolecules, which trigger a radical chain reaction. In fact, any violation of the “antioxidant plasma barrier” can result in oxidative damage to cells and tissue.

The health and medical information provided for you on our website is not a substitute for professional advice or treatment by a licensed doctor.
<?