What is the feeling of puppy love

For her, people are potential petting machines, and she reacts to everyone as if it could be the beginning of a great friendship.

"May we your dog ..." Yes, of course. Mille enjoys the caresses and friendly attention that alleviates her fear of the big city and the noise. I had thought that life in the concrete desert would be more stressful for her. At least that's how I feel. I long for the forest and open space. Mille, however, obviously feels right at home in the big city. She doesn't mind sirens. Cars don't disturb them. For her, people are potential petting machines, and she reacts to everyone as if it could be the beginning of a great friendship. Not a bad outlook on life, I think. And through my dog, I experience people in the same way. Granted, I receive far fewer caresses from strangers than my pooch.

You really can't blame anyone for preferring my doggie. In return I enjoy nice conversations. As a dog owner in the city, you quickly learn about the great longing for the dog: So many tell you about the dog they once had or about the dog they couldn't take with them, or about the dream of having a dog at some point. The need to communicate and the need to be caressed are perfectly balanced, it seems to me. You exchange anecdotes, enjoy each other's company for a moment, part ways and move on. You are a bit happier and think to yourself: Humanity is not that bad. If you look at them through the eyes of a dog.

I had decided that this buck should be the first buck that the dog should try.

"Come here!". The heavy machine rumbled like a sleeping bear. The dog was nine weeks old and wanted absolutely nothing to do with it. “Come on, Mille! I'll show you something great. ”She struggled with the urge to be with me and the fear of the big, four-wheeled vehicle. She looked at me in disbelief. "I never go on that thing!" She conveyed with every fiber of her little body. I, however, didn't want to know anything about it. I picked her up carefully and placed her on my lap. With one hand on the dog and the other on the gas, I set the machine in motion and slowly started rolling. Judging by the way my dog ​​looked, she thought I was completely insane. But I knew she would change her mind soon. I had something to show her.

Thirty minutes earlier I had stood at the edge of the forest and watched a little roebuck graze all the foliage within a hundred feet. “I should have brought the bow with me,” was my first thought, but I didn't have enough time before dark. Instead, I had taken my rifle and, happy as a boy scout, stalked through the forest in the dim light. Soon I spotted a large eared owl cub in a tree ten meters away. It was probably the very first time it had left the nest. It looked over at me, somewhat confused, as I continued to creep through the darkening forest. The roebuck had been waiting for me in a clearing fifty yards away. A small animal. A yearling with little to do with it and the ideal animal to take out of the gene pool. I knew about the majority of the deer. It was clear to me that without this animal the fight for food in this region of the forest would be easier. It was the right decision to kill him.

I took the animal down with a clean shot and laid it under the spruce that it had been nibbling on a short time before. I had decided that this buck should be the first buck that the dog should try. A little buck for a little dog. It seemed right. I pulled the animal closer to the path before I went to get my future sniffer dog.

The drive back to the roebuck in the all-terrain vehicle did not take long. However, my puppy didn't like the ride. Not at all. The humming machine. The bumpy road. It was all too strange. But she stayed in her place on my lap all the way. Her big puppy eyes looked at me: "If only this goes well, buddy ...". I stopped where I left the deer and put the dog on the ground. "Mille," I said, patting my chest - a signal we'd practiced many times. "Mille - search!" She immediately began to search the place. So far we had only practiced the search command on dog snacks, but she obviously knew exactly what this game was about. Like a tiny, whistling steam locomotive, it stuck to the track like a magnet to an iron and followed it in a straight line to the deer in the bush. Then she stopped. Sniffed the goat and waited for my order. "Come on," I said. She went straight to the neck of the dead animal. To make her feel successful, I let her rip and rage for about a minute. Then I put the deer on the quad bike while my puppy jumped around like a kid on Christmas Eve. It took only one word and she jumped on my lap. She was proud. Like a lioness with freshly hunted prey. 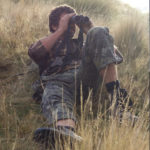