He says everything is a coincidence, and many of the pictures are decidedly political: A Hamburg exhibition shows the subversive, strangely dream-lost, surreal works of the Bremen painter Norbert Schwontkowski. 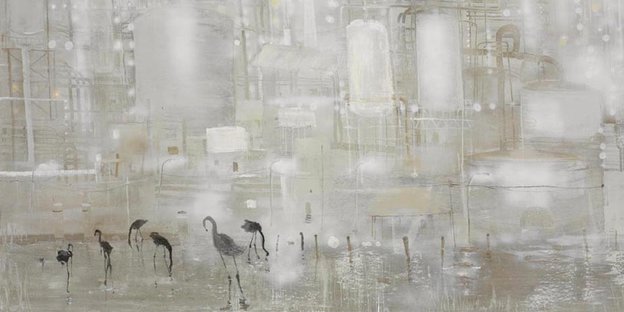 HAMBURG taz | And if you put him in a tire store, he would paint the tires. They look like snakes and you would first think: They are alive. And then: he paints weird things. Because the Bremen painter Norbert Schwontkowski, who also taught at Hamburg's University of Fine Arts and is currently exhibiting at the local art association, has opted for the representational. He wants to tell stories and that's best for that.

He is also a craftsman: he likes to work with a spatula and mix pigments in his fist. It takes hours to get the perfect substrate, which is as compact as clay and also contains metal oxides so that the color can change overnight.

This foil fetishism fits in with his origins: Schwontkowski once brought a painting by the painter Fra Angelico to painting. Fra Angelico was the link between the Middle Ages and the Renaissance. And an abstract background is a must on medieval pictures.

For Schwontkowski it is an epistemological instrument: he says he always has the foreground motif in his head first. But he begins the painting with the background. He spent a long time looking for the right color and consistency in order to place the foreground motif in the context of the conceptual and understanding of the world. Maybe also in a spiritual one, Schwontkowski once wanted to be a priest.

When he finally has the background, the rest comes, briefly dabbed on in a calligraphic manner. The result is a factory like in the picture “Flamingo”: In an almost unearthly, mystical light, a giant refinery appears, like a fairytale castle. And it really is a fairy tale: that of the (environmentally) friendly factory that - in a clever break from socialist realism - points to a bright future.

The vision is counteracted by flamingos at the very front: Actually insignia of poetry, here they have mutated into counterpoint. Because if the factory doesn't look dirty, at least it's the birds, dripped in oily black on the picture. Are you an oil spill victim?

Possible, but actually the picture looks like a surreal dream - like all Schwontkowski paintings. In them he also reflects, quite en passant, the concepts of art and abstraction: because this painting is actually not representational. The objects are random, could also be other; Shape is constantly changing and the dabbing and dripping suggests that the color could have flowed differently.

“Kneeling before abstraction” is the logical name of another picture that is programmatically hung at the entrance in Hamburg. A person with a sheep's head is shown and you don't know: is the submissive observer the sheep - or the dutifully abstract artist? Is abstract art overrated? Is that the right question at all? Ultimately, every artist struggles with color and form, and Schwontkowski only continues to paint “because I am not satisfied with the previous picture”.

But that also means that the entire work results in an overall narrative and that all the images in the Hamburg show are connected. One link is the always brown-black-gray colors, another is the reinterpretation of the term “oil”. Because Schwontkowski is not a simple “eco-painter”. The pictures in the Hamburg show were created between 1999 and 2013, but are decidedly political. For example, on the picture “The Other Continent” - like in a museum display case - African masks are emblazoned: insignia of the still colonialist reception of this continent. But the color scheme is even more important: Oily, muddy and black is the background of this horror cabinet and it makes sense to think of Shell's oil pollution in Nigeria, for example. A smug commentary on the new colonialism, which is destroying the livelihoods of those whose masks he locks in the museum with pleasant horror.

Two steps further, Schwontkowski has dripped oily black helicopters on a dull yellow background. They look like attack helicopters and the picture is called "Close to the ground". It was created in 1999, but the exhibition runs parallel to the public discussion about combat drones in the Bundeswehr. A coincidence, a void - but that's what art is about, which protrudes refreshingly directly into everyday life.

But anyone who thinks that Schwontkowski is permanently melancholy is wrong: there is definitely a way into light. Then namely when Schwontkowski paints the above-mentioned shed, which is full of tires and oily inner tubes. So once again the oil becomes the aesthetic subject, but that is not the whole world. Because the door of the cubicle is open and there are bright clouds flying in the glaring light. There is paradise there, you can feel that, but before you get really happy you suspect that it is a foil, an imagination like René Magritte's.

He also played with the spheres of the unconscious and Schwontkowski is in his tradition as well as in Salvador Dali's and Max Ernst's, as shown by the parallels of motifs in his pictures. Schwontkowski is a kind of political surrealist. And the Hamburg exhibition is a pleasantly subversive fairy tale.