It's raining near you now

Forecast for Berlin and Brandenburg

Under a weak influence of low pressure, a westerly current still carries relatively cool air to Brandenburg and Berlin. On Monday, warmer air temporarily entered the region from the south. THUNDER / WIND: From noon today, individual thunderstorms with gusts of wind up to 60 km / h (Bft 7). Decreasing in the evening.

Today a few thunderstorms with gusts of wind, easing in the evening.

Today next to many clouds, sunshine at times. Regional showers, from noon individual thunderstorms with gusts of wind up to 60 km / h (Bft 7). In the evening cloud cover and gradually decreasing precipitation. Temperature rise to 15 to 18 degrees. Weak to moderate southwest to westerly wind. In the night of Whit Monday in many places slightly cloudy or clear and free of precipitation, at the beginning still last showers. Cooling down to 7 to 4 degrees. Weak wind around south.

On Whit Monday bright to cloudy and dry. Most sunshine in Niederlausitz. Temporarily warmer, maximum temperature 20 to 23 degrees. Weak, at noon and afternoon at times moderate southwest to southeast wind. In the night to Tuesday cloudy, partly cloudy and local showers. In the Prignitz low thunderstorm tendency. Low values ​​around 10 degrees. Weak southwest wind.

Forecast - the day after tomorrow

On Tuesday change of sunshine and lots of clouds, mostly dry at first. From noon, local showers, occasional thunderstorms. In the evening cloudiness decrease and gradually decreasing showers. Maximum temperature around 17 degrees. Weak, moderate to fresh southwest wind, near showers and thunderstorms gusts of wind. In the night of Wednesday cloudy or slightly cloudy and only a little bit of rain. Low values ​​around 8 degrees. Weak to moderate southwest wind.

On Wednesday a lot of clouds, from the morning occasional showers, from midday local thunderstorms. Temperature rise to 15 to 18 degrees. Moderate, partly fresh west wind, with thunderstorms with gusts of wind. During the night cloudy and local rain. Lowest values ​​between 9 and 7 degrees. Weak to moderate southwest wind.

represented by a forecast for Berlin-Tegel and Potsdam 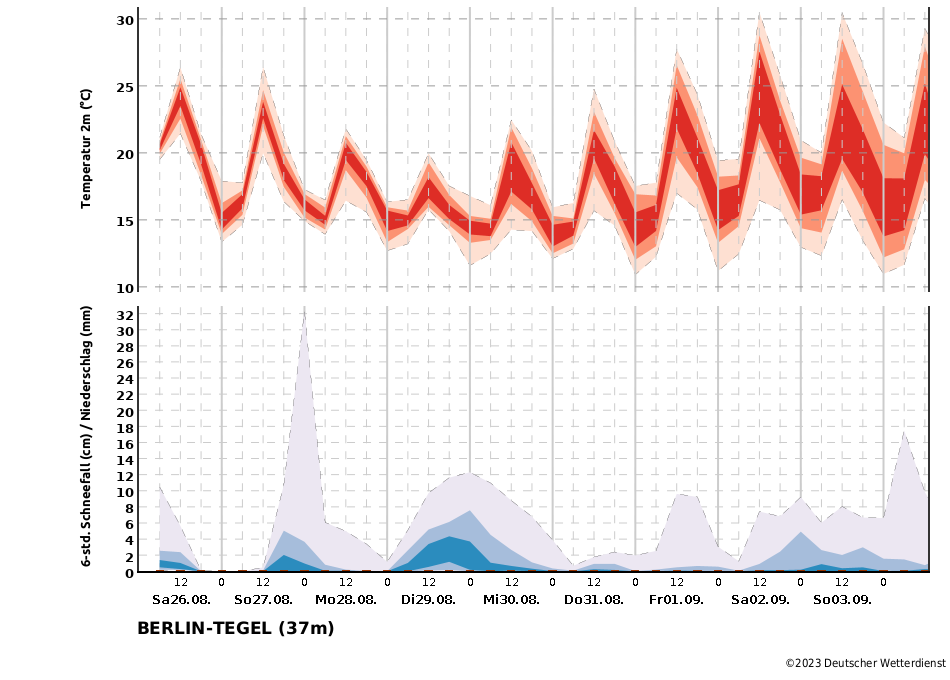 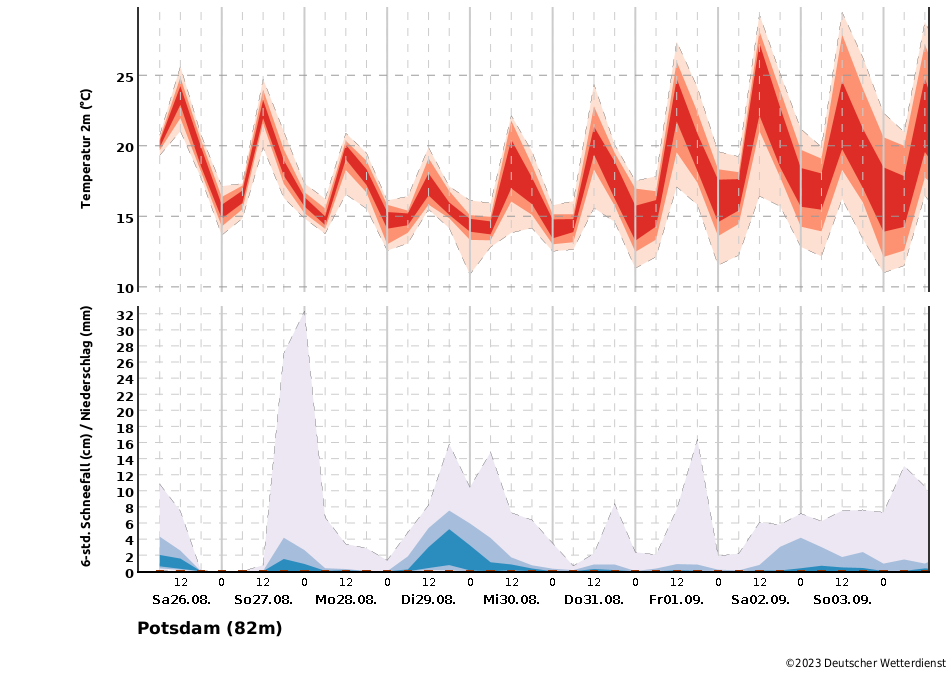 Explanation: The trend forecast describes the framework in which temperature and precipitation / snowfall will develop.
For this purpose, several predictions are calculated, which should include all potentially expected developments as far as possible.
The representations summarize the range in which 50%, 80% and 100% of these predictions lie.

In rare cases the actual weather development can also be outside the 100% range.
<?