Is it really all just for show? 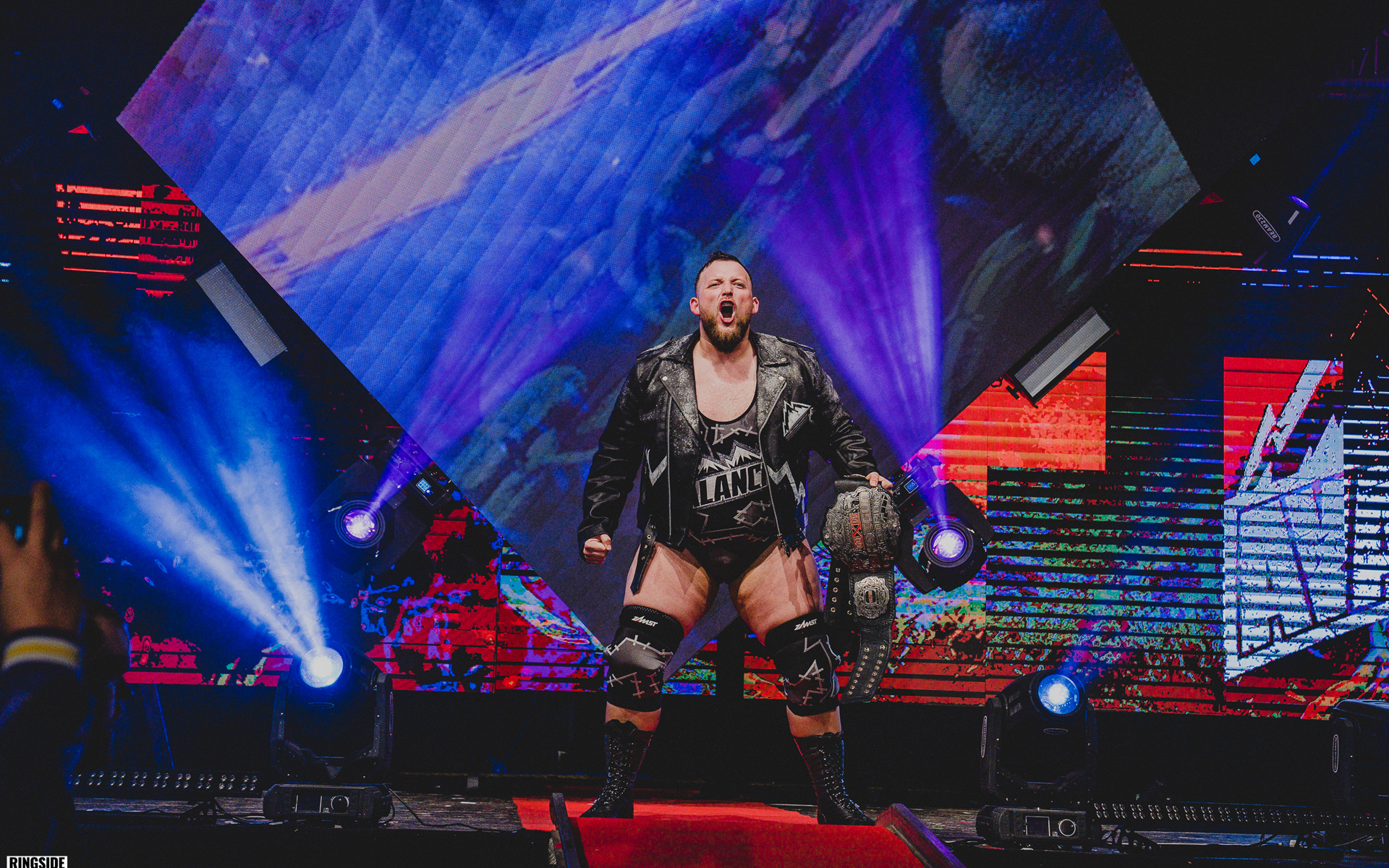 "None of this is real anyway!" As a professional wrestler, Robert Dreissker has heard this sentence many times. But the big show in the ring takes a lot of hard work for the fighters. A look behind the scenes of wrestling.

The Baltimore Arena is filled with raging spectators. They are waiting for an exciting and brutal fight. In the middle of the hall, Shane McMahon is already in the ring. Accompanied by enthusiastic calls from the fans, his opponent comes closer and closer to him. “The Rock” has been the world champion for 24 hours and now someone wants to take his title away from him again. Confident and with oiled muscles, he steps into the ring. The two wrestlers play a wild match for ten minutes. Even the referee isn't sure. Everyone is going crazy. “The Rock” wins and McMahon hangs upside down from the ring.

With more than 10.5 million TV viewers in the US, this match is one of the most watched of all time. That was 20 years ago. Even today, wrestling shows like WWE SmackDown or WWE RAW are still running on the screen. What looks so spontaneous and at the same time so violent and real in the ring means a lot of work for the wrestlers. Because in addition to the tough athletic training, it is particularly important to make the staging as entertaining as possible for the audience. Is everything really just a game in this sport?

Robert Dreissker knows how much show and how much sport there is in wrestling. The native Austrian has been active in the German professional wrestling scene for more than ten years and has won numerous titles during this time. At the beginning of the year, the 31-year-old took on the role of head coach at the wXw Wrestling Academy in Essen. At this sports school, beginners and athletes with previous experience learn everything they need to become professional wrestlers. Dreissker has traveled all over the world through sport, and has already been in the ring in Tokyo and New York. You can find countless pictures of him in the arena on the Internet, roaring and looking wild. Dreissker's expression is calmer in his office at the Wrestling Academy. He talks enthusiastically about his sport.

You don't have to be a muscleman

The head coach is a tall, stocky guy. He looks like he can easily throw someone through the ring. Axel Halbach, another trainer at the Academy, is rather slim. His specialty: jumps and flight stunts. “There was never before such a diversity of body shapes in wrestling,” says Dreissker. Most of the fighters were muscled, like “Hulk Hogan”, who looked almost superhuman with a height of two meters and a well-toned body. “Today the physique is very different. There is everything from the 1.60 meter tall wrestler to the 2.2 meter giant weighing almost 200 kilos. " Dreissker thinks it's good that the ideal of a muscle mountain in the ring has changed. Nevertheless, a picture of Arnold Schwarzenegger hangs in the training room of the Wrestling Academy as motivation. Strength training plays an important role in wrestling, especially in connection with endurance. "It is not absolutely important that a wrestler can lift 300 kilos, but lift 100 kilos as often as possible," explains Dreissker. That is much more like the effort in the ring.

Without the sporty basics, all shows are of no use

For Dreissker it is difficult to put the sport and the show in a relationship. For him, the sporty component is right at the top. "If you can't move a role, there is no point in being a great actor." First the wrestlers have to know the sporting basics, then you can exaggerate the whole thing. At the end of the day, the fighters put the icing on the cake with the show.

While other athletes take part in competitions under their real names, wrestlers create their own personalities for the ring. "Convincing only with the sporting aspect alone, without a prominent character, is rather unlikely," says Dreissker. The audience would especially remember the fighters who slip into particularly unusual and crazy roles. World-famous wrestlers * mostly represent superhuman figures, such as the "Undertaker". Even 30 years after his debut, the wrestler is still famous. He appeared as an undertaker without feeling pain and with supernatural powers.

Developing such a character is a long process. Dreissker advises taking parts of your own personality and inflating them a bit. It is important to look at what you can work well with. In the pro wrestling scene, for example, there are always people who originally came from kickboxing. “It would be pointless to put this person in the character of a gardener. Maybe she could do that, but the bottom line is that this is a kickboxer, ”says Dreissker. In the end, it comes down to originality in order to be remembered by the audience.

Telling stories in the ring

Robert Dreissker has been in the ring as “Avalanche” since his debut in 2009. He named his personality after his favorite action. The opponents are crushed in a corner of the ring as if they were being run over by an avalanche.

This wild demeanor was typical of Dreissker's character. He wanted to solve everything with muscle power instead of using his head. Today his wrestling personality has grown a bit calmer and more mature. As in real life, he now appears as a trainer in the ring. “In terms of content, it's completely authentic. This is of course very easy to depict because it reflects my real life, ”explains the 31-year-old.

This goes hand in hand with one of the greatest prejudices in wrestling. “That's all fake”, Dreissker hears most often. Much that the athletes do in the ring cannot be faked. “If someone jumps off the third rope, which is two meters high, he jumps down there. We cannot turn off gravity either. The trick is to carry out the actions in such a way that nothing really happens. " Dreissker has already experienced firsthand how important this is. In 2016 he dislocated his shoulder during a fight and still fought for 15 minutes. The result: injuries to the shoulder joint, a torn biceps tendon and an eleven month break.

What wrestling and waltz have in common

Although the winners are already determined before the fight, it is never fully planned. The wrestlers don't even have the time to choreograph everything during training. There are many more checkpoints that take place at certain times and that both athletes know, Dreissker explains. He compares this way of preparing for a fight to going to the dance school: “I know how to dance the waltz and so do the other person. We have never danced together before, but the bottom line is that it will still be a waltz. " The more often the wrestlers fight against each other, the better the chemistry and with it the match. The fighters are booked by organizers. Only then will it be decided who will compete against each other.

In order to guarantee that everything goes well in the ring, the various motion sequences are practiced over and over again during wrestling training. Beginners, for example, start with the “waist lock”: a grip in which the waist of the opponent is grasped and the person is fixed in this way. In combat, athletes can take a “takedown” from this position, i.e. bring opponents to the ground. In training, the attacked person also practices how to free himself again. Such grips are standard knowledge so that both wrestlers can react to each other in a fight.

Win or lose? Not really matter

If the wrestlers were to choreograph their fights completely, an important factor in this sport would also be lost: the interaction with the audience. “If the audience were celebrating something totally, it would be stupid as a wrestler not to continue the action. After all, the goal is to entertain the audience, ”says Dreissker. The audience especially likes it when someone gets a few blows. Since the fights are so much about entertainment, wrestlers don't care if they win or lose. “I like to compare it to an action movie: are you just a good actor if you survive every movie? Or can you die? ”Says Dreissker.

There is a lot of action in the German wrestling scene. Shows without an audience are currently being recorded and published on wXw's streaming platform. Before the pandemic, fans could watch at least one wrestling show in Germany every weekend. Events were often held in the Ruhr area, Hamburg and Saxony in particular. Since wrestling is more of a niche sport in this country, the events do not fill huge halls like in some US cities. On a good evening, a German show has 1,500 viewers. Five to six fights can take place per event, but also up to eleven encounters in the ring. A match lasts fifteen minutes, a complete show between three to four hours.

Wrestling is a male-dominated sport, but has also increasingly been practiced by women in recent years. That is why most organizers now make sure that at least one women's fight takes place. Then either two women compete against each other or in “intergender wrestling” one woman against a man. Regardless of who he or his students fight in the ring, one thing is particularly important to Robert Dreissker in wrestling: “Heart and commitment”.