Like many other wild animals, squirrels can adapt very well to the local conditions of the city; these animals are called cultural followers. Usually the squirrels have a hectare-sized habitat in which to roam. In the city, on the other hand, their living space is very limited and they live on a smaller, densely populated area.

There are loners among the squirrels, these are mostly older males. But squirrels also live in small, relaxed groups. So you can often see them in twos, threes or four on the trees. There are also animals that have friendships and stay together. Especially in winter, croissants can also be found together, which then sleep together in the nest to defy the cold.

Squirrels don't hibernate like hedgehogs. You can't throttle your metabolism that low. But in winter their activities slow down a lot. They keep the so-called hibernation. This means that they sleep a lot more, but get up every day, or at least every other day, to eat.

Squirrels have an important function in nature. They provide food for other animals and "plant trees". In autumn you can often see them walking on the ground and burying nuts and acorns in the ground. They do this with their hands. They hide vast amounts and do not retrieve all of their supplies. New plants then grow out of the nuts and acorns. Squirrels have a very fine sense of smell. The nuts are often licked before they are buried, as this helps them to be found again.

There are foresters who are happy about the help of the squirrels in planting new oak trees, but some gardeners are not so happy about new walnut and hazelnut sprouts.

Squirrels are flight animals. But they also have many enemies. Many nests are robbed by crows that the squirrels feed to their brood. Magpies and occasionally jays also eat the young. The pine marten can climb trees very well, it is nocturnal and attacks the squirrels when they are sleeping. Squirrels are diurnal. But by far the greatest enemy is humans, who change the living space too much. Trees that are not only a habitat for croissants are felled without consideration. A lot of squirrels are run over. 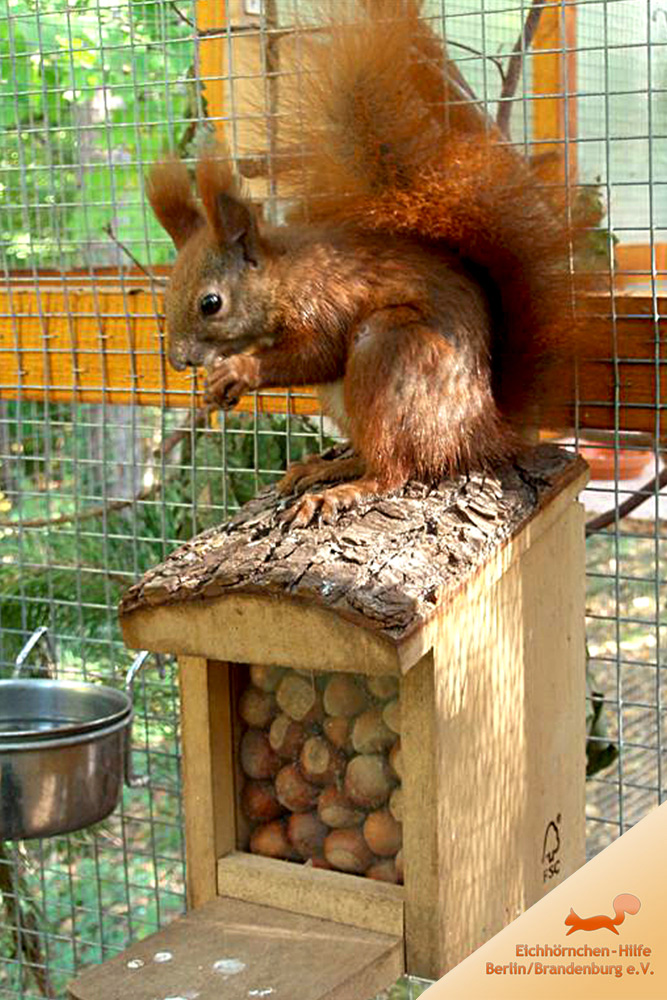 In the gardens, many people do not pay attention to providing the animals with a survival-friendly space. There are too few water points where not only squirrels can find the vital water. Rain barrels and swimming pools are not covered, so the squirrels drown in them. It is particularly tragic when a mother drowns and the young have to starve to death in the nest. Squirrels (and birds) get caught in nets thrown over fruit trees and die in them. Garden owners still spread poison like slug pellets in the garden far too often. This kills the squirrels (hedgehogs and birds), as does the so-called "blue corn", granular garden fertilizer. Unfortunately, too many people don't know this and kill many garden animals with it.

The squirrels used to start mating in January. Due to climate change, something has already changed here: the mating season for squirrels begins in December and, according to our observations last year, young are now born late into August / early September. This has dramatic consequences for these animals: winter comes much too quickly for them. After a gestation period of approx. 32 days, the female gives birth to 2 to 5 young (sometimes 1 to 6) and hardly leaves the Kobel in the first two weeks.

The young are born naked, blind, and deaf. At around 2½ weeks the first light downy fluff forms and by 3 to 3½ weeks the young are hairy. At 4 ½ weeks the eyes open, at 3 weeks the ears begin to detach from the body and hearing increases. The mother raises the boys alone. After six weeks, she carries the little ones to another nest, either holding them by the neck or the young ones cling to them while they are being carried. The young are allowed to leave the nest alone for the first time when they are around eight weeks old. You will stay with your mother and each other for up to four months.

At least half to of the young do not even live to be a year old. A squirrel in nature can live to be around 3 years old, with very favorable conditions, such as additional feeding, and optimal surroundings, maybe 5 to 8 years. Squirrels that are kept in captivity - outdoor aviaries with natural equipment - can live to be 10 to 11 years in individual cases.

After weaning, the female can become pregnant again. Typically, squirrels have kittens twice a year. If they die prematurely, there can be three litters a year.

Croissants are mainly vegetarian. The food of the squirrels are hazelnuts and walnuts, tree shoots, seeds from fir, spruce and pine cones. They eat mushrooms, also toadstools, berries, fruit and small animals, which z. B. is located under the tree bark. There are also squirrels that get a bird's egg or even a very small young bird if the food supply is scarce. Squirrels have also been observed eating smaller carrion (mice). Squirrels nibble on the bark, but most of their food is held in their hands.

The squirrel builds its nests, called "goblins", usually in the trees, in forks of branches. It collects twigs, branches, bark, grass, moss and a lot more. Shaped into a ball, it carries the material up and forms a nest out of it, which, contrary to many representations in school books, is not always round into a ball. It can also look like a bird's nest. Squirrels are very inventive when it comes to their nests. They like to use tree hollows, and when more and more of their natural habitat is being taken away from them in the city, they also climb up the house walls and build their goblets in window boxes, on window sills or blind boxes. Bird nest boxes are also accepted. And sometimes they gnaw holes in the house walls to build a nest, often to the annoyance of the owners. They also occasionally use laundry items in gardens and on balconies to upholster their Kobel.

Squirrels don't just have one nest, they have several, up to 5 kobels. That also makes a lot of sense if the main cobblestone is destroyed by a storm or human hands.